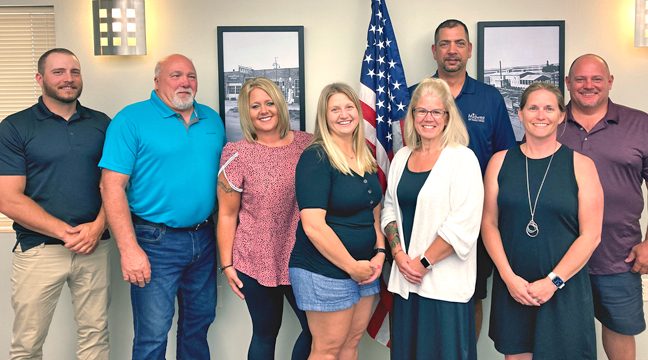 Mayor Tim Goenner reported that the Lions had donated $7,200 to the park fund to help with several projects at the main city park, which includes the Chet Goenner Pavilion and the ball field.

The mayor plans to meet with the group again at a future meeting to further clarify the scope of the projects and he publicly thanked the group for their efforts.

Public Works Director Dustin Luhning discussed several projects with council, including work to be completed on the water tower. Several reconstruction meetings have been completed and companies have been preparing the structure for the work.

He also reported on three new homes being built in the Hunter Lake Bluffs development, with meter installations and other inspections being completed.

Luhning also reported on the final plat specifications that are being worked on for several developments within the city.

In park related news, Luhning announced that an old pair of monkey bars is being refurbished and powder coated and should be re-installed soon at the playground.

• Listened to Koren deliver the Sheriff’s Report from last month, which included 54 calls for service;

• Received a report from member Brandt, who serves on the Fire Department committee. She noted that the plans for the new fire hall are still under development, while the department recently completed repairs to one of its engines. The committee has also recently discussed the lack of state and federal funding for fire departments;

• Approved moving the September meeting to Tuesday the 6th, as Monday that week is Labor Day;