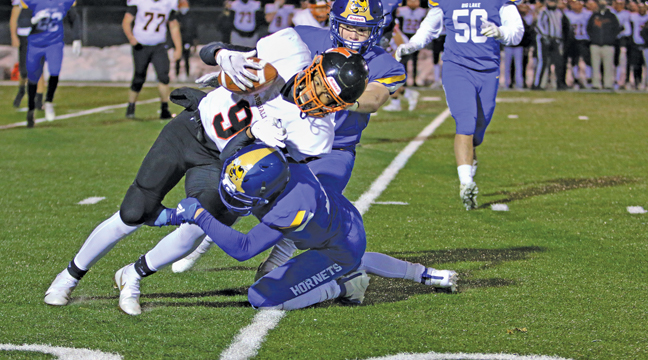 Two in a row! Hornets silence Thunder in section play

The Hornets entered the first round game versus Zimmerman as the #5-seeded team while the Thunder were #4. Big Lake had a 1-5 record entering Tuesday’s contest while Zimmerman was 2-4.

After a scoreless first quarter, the Hornets got on the scoreboard when Rieley Mullen took the hand-off from 22 yards out and tallied the first score. The extra point was good and with 3:30 left in the second quarter, Big Lake was up 7-0.

In the third, Mullen made it a three-score lead when he converted a long drive by the Hornets into a four-yard TD run to go up 21-0.

The final blow to Zimmerman’s comeback chances came with 8:10 to go in the fourth when Iverson picked off the Thunder QB and scampered 40 yards for another TD.

Two late TDs by the Thunder in the last four minutes proved futile as Big Lake celebrated at the horn.

The Big Lake Hornets capitalized on a third quarter fumble recovery for a TD to capture their first and only win of the 2020 season, over the Marshall Tigers last Wednesday night.

The final score was 16-13. Marshall was a last-minute replacement for Chisago Lakes, who bowed out of their season schedule earlier on over complications with COVID-19.

Big Lake got the scoring started in the first quarter when QB Brandon Stern crossed the goal line from two yards out for a 6-0 lead. Their two-point conversion try fell short and the score remained 6-0.

Marshall would respond with two scores early in the second quarter when Tyler Maeyaert hit Bryce Lance for a 73-yard TD score to go up 7-6. The second TD came when Maeyaert found Lance again — this time from 61 yards out, to put the Tigers up 13-6.

The Hornets were able to shift some momentum their way when late in the second quarter, Josh Hunt booted a 25 yard field goal to bring the score to 13-9.

The second half featured great defense on both sides of the ball and limited opportunities on offense.

At the 4:46 mark of the third quarter, Big Lake had Marshall backed up deep in their own end of the field when Hayden Thieke scooped up a fumble at the 20-yard line and scooted to paydirt for a Hornet lead. The XP was good and Big Lake was staring at a late lead they’d hope would lead them to their first win.

Neither team could dent the scoreboard in the fourth quarter and the Hornets held on for the big victory over the 4-1 Tigers.

Big Lake finished with 269 yards on 63 plays compared to 304 yards on 67 plays for Marshall. The Hornets had 217 yards gained on the ground while Marshall had 264 through the air.

(CANCELED) The Hornets are scheduled to play at #1-seeded Becker Saturday at 1 p.m.