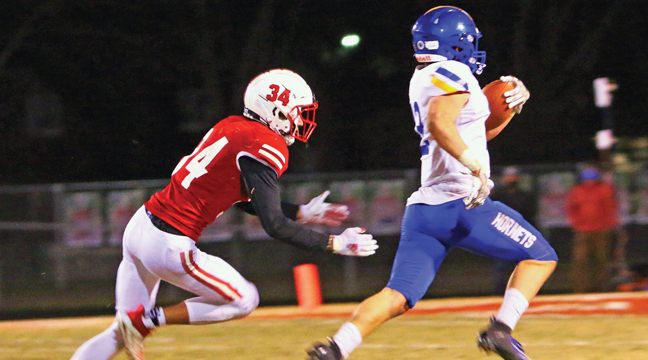 The Big Lake Hornet football team took their 0-5 record to the road last Friday to play the Willmar Cardinals on a warm, fall evening.

Again, the Hornets hung in there, until a strong second half by Willmar crushed their hopes for their first win.

Junior running back Michael Price dealt the biggest blows to Big Lake as he scored twice in the final two quarters to notch the win.

Willmar lit up the scoreboard first when RB Alex Schramm rambled into the end zone from three yards out to put the Cards up, 7-0. Big Lake responded in the second quarter when Rieley Mullen darted through the Cardinal defense for a 57-yard TD to tie the score.

The two teams stayed tied at 7-all at halftime.

On Price’s first score, he got to the outside and broke three tackles to score on a nine-yard scamper and a 13-7 lead.

After Willmar’s defense stopped Big Lake on a fourth-and-eight in Cardinal territory with 5:10 left to play, Price eventually tacked on some insurance with a three-yard touchdown run with 1:16 to go.

Price finished with 78 yards on 21 carries.

On defense, the Cardinals limited the Hornets to 101 rushing yards. The pass defense held Big Lake quarterback Brandon Stern to three-of-12 passing and had interceptions from Tyler Ludwig and Eli Jorgenson.

The Hornets finished with seven first downs compared to 11 for Willmar. Ashton Mckenzie had an interception and the team was assessed seven penalties for 58 yards.

Willmar had three penalties for 25 yards, the two interceptions and sacked Stern twice.

Big Lake was scheduled to host Chisago Lakes in their final regular season matchup Wednesday, but due to COVID-19, Chisago Lakes has ended all fall activities including football for the remainder of the year.

The Chisago Lakes school board, in a virtual meeting with more than 300 people listening in, voted unanimously to discontinue fall sports after the 1,100-student school in Lindstrom, Minn., moved swiftly back to distance learning last week as COVID cases soared.

It was announced earlier this week, Big Lake arranged to have a game played against Marshall with the contest being played in New London-Spicer.