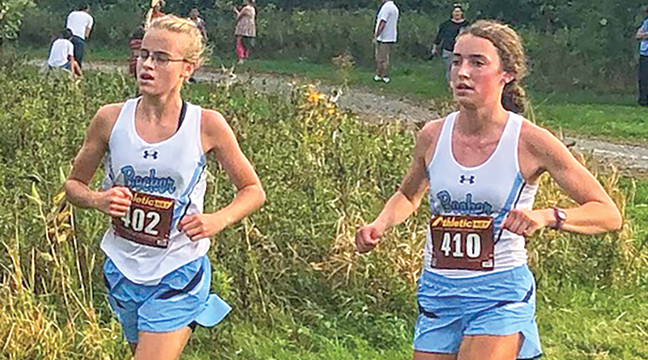 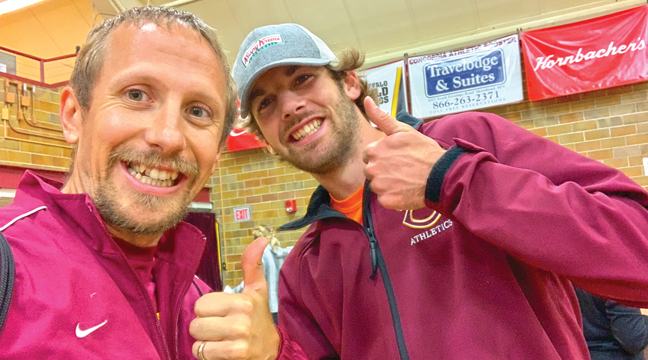 Previous Next
TASHA BERTHIAUME and Brooklyn Karel were side-by-side for much of their race last Thursday. (Submitted Photo).
Coach Dustin Weege was able to connect with a Bulldog Alumni runner Justin Kringler this past weekend in Moorhead. Kringler is a senior Math major competing in Cross Country and Track&Field at Concordia College. He is a fellow ‘CobbDog’. (Submitted Photo).

It was a four team meet that was highlighted by interesting weather.

“After we arrived the drizzle turned to rain and then included some lightning so everyone gathered indoors for a delay,” said girls Head Coach Trish Kealy.  “Once we were able to resume we started with a sixth grade 3200 meter race which was won by Adele Changamire, second by Grace Mork and third by Josie Reckelberg.

The decision for the Jr. High race was to run boys and girls together and score separately.  Sophia Malisheski stepped up to place second, Kaylyn Rickard fifth and Chloe Peterson 11th.

All the varsity and JV girls and boys ran together in one race and the judges scored them all separately.

“That is the first time I have seen that and it was quite interesting!,” said Kealy.

“The team continues to work well together and challenge one another to improve,” said Kealy.

In the Jr. High race, the Bulldogs did not have a complete team with just four runners for the day (team scores require at least five runners), but the guys would have scored well as a team with the four Bulldogs placing highly in the race.

Mason Tschida (12:45) darted to the front of the race and maintained a great pace throughout the two mile course to take home the Jr. High crown for the day while teammate Weston Denne (13:26) was just a little behind and captured the #4 finish for the race.  Next was Carson Schuster (14:22) in his second race of his career with a nice top 10 finish.  Mavrick Pink (15:11) placed 13th.

In the next race with both varsity and JV combined, the Bulldogs saw some nice racing and pushed each other to improve the team.  For varsity, Tyson Ricker (17:19) and Mason Becker (17:55) took the champion and runner up spot for the race. Becker’s time was a PR for him and marked just the second time he’s been sub-18 in the 5km.  Jase Tobako also yielded a top 10 finish with his time of 19:05.  Caleb Reckelberg (19:41) continued his consistent reign as the fourth Bulldog to cross the finish line but did so in a spectacular fashion with a top 15 finish and a 26 second PR to break the 20-minute barrier which he’d been flirting with since last year.  Alex Kinney(21:00) and Jacob Peterson (21:10) also ran well and accomplished season best times with the day.  Peterson ran his first ever varsity race at Sauk Rapids along with teammate Jonathan Drury (22:15).  Drury stepped up well for the opportunity and yielded a 35 second PR.

As a team, the Bulldogs scored 47 points to take second for the event just a bit behind Cambridge-Isanti.

In the JV portion of the event, which was run together but scored separately, the Bulldogs also captured the #2 team spot behind Cambridge-Isanti.  Eighth-graders Parker Spindler (20:11) and Evan Hubbard (20:16) tried their hands at the 5km distance and performed quite well with a couple of top 12 times.  Spindler placed ninth in the JV portion of the race while Hubbard placed 11th.   Junior Noah Bloch(24:23) was the third Bulldog in the JV event followed by Landon Lahr (24:44).  Next came Aiden Frommelt (25:11) as the fifth Bulldog and he crossed the line with a significant accomplishment.  Frommelt raced to a nearly three-minute improvement on his season best time and demonstrated the value of his daily commitments to growth.  Teammate Denlan Harmoning (25:31) encouraged Frommelt along the way as he ran beside Frommelt for a portion of the race.  Bulldog Thomas Cota (31:53) also accomplished a season best time in his race as he continues to see gains with his performances.

Becker hosted a home invitational Tuesday at Pebble Creek across from the clubhouse.  Saturday, the teams compete at the Alexandria Lions Meet of Champions.