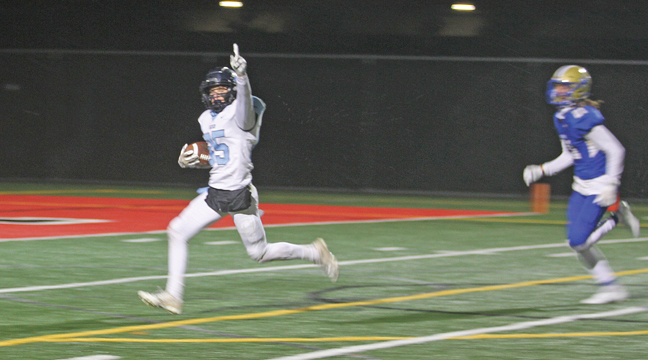 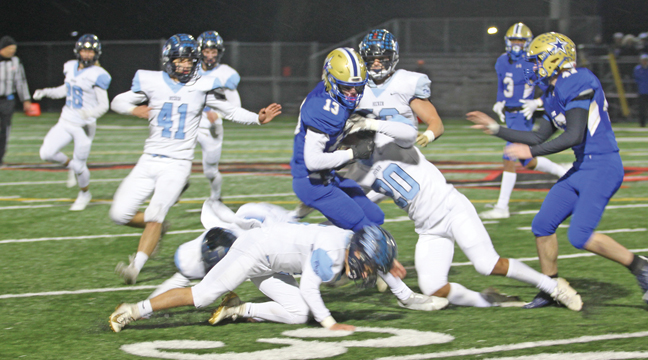 Previous Next
BECKER WR NICK BERGLUND signaled “#1” to the Becker fans as he neared the goal line of a 60-yard TD to seal the deal against Holy Angels last week. (Patriot Photo by Bill Morgan).
THE BULLDOG DEFENSE DID THEIR THING AGAIN as they swarmed the Star players and limited them to just 159 yards in Becker’s win last Thursday, 24-7. (Patriot Photo by Bill Morgan).

The Becker Bulldog football team is heading to “the Bank”.

With their quarterfinal win over Holy Angels last Thursday in Monticello, Becker earned their spot in the state semifinals and a chance to play on the Minnesota Vikings’ playing field at U.S. Bank Stadium.

The semifinal game was set to play Thursday against Kasson-Mantorville (8-3) after they beat Fridley 42-7 the same night Becker beat Holy Angels by a score of 24-7.

The game was a nail-biter as both teams went down and scored TDs on their opening drives on a cold, snowy night in Monticello. On Becker’s first possession, they seemed to have the Stars reeling, trying to figure out how to stop Ryan Bengtson and the versatile Bulldog offense. It was Bengtson who started the scoring on the night when he scampered into the end zone from 15 yards out midway through the first quarter.

Becker’s side of the stadium was packed with eager and faithful fans — and their boisterousness was felt throughout the night — especially from the student section. Holy Angels had a good showing of fans, but they couldn’t keep up with the exuberance on Becker’s side.

Holy Angels is a running team and their QB (Aaron Boarman) and star RB (Emmett Johnson) carried most of the load on this night. And it was Johnson who scored the first Star TD when he climbed over the backs of his O-line to penetrate the goal line in the second quarter.

Ryan’s brother, Zach — who has been incredibly reliable on most XPs and FGs all season, once again proved his worth by nailing a 26-yarder late in the second quarter to put the Bulldogs up 10-7.

Despite the low score, fans were expecting the Bulldogs to turn up the score some more and knew the defense was going to keep them in the game. Sure enough, the third quarter featured lots of good plays and spectacular defense and as the teams entered the final quarter, the game was still within three points.

That is until Bengtson and Nick Berglund hooked up.

In the fourth, Bengtson was pressured and scrambled through the pocket to gain an opening and looked up to find Berglund 15 yards past the defender in the middle of the field. Bengtson heaved the ball and Berglund caught it in stride as the Star defender tried to make up ground. However, Berglund was sure he was faster and he pointed to the stands as he neared the goal line for the biggest play of the game.

He did a somersault as he leapt to paydirt and the Becker faithful went crazy.

Holy Angels — now down by 10 with about 10 minutes to go — changed their game plan and started throwing the ball more. A couple butterfinger misses by Star receivers and again, solid defense on Becker’s side of the line gave life to the Bulldog sideline.

After getting the ball back moments later, Becker drove the ball down the tired Star defense and Bengtson and Berglund capped off the game with a one-yard pass completion with just a minute left.

It was then the players on the bench started chanting, “We are going to the bank.”

The clock ticked off on the Stars and the celebration began for the Bulldogs and they are just two games away from their fourth state title.

Ryan Bengtson finished the game with 122 yards through the air on eight completions and two TDs. On the ground, Carter Callahan ran the ball 18 times for 54 hard-fought yards.

Berglund was the star in the passing game with the two TDs on three catches for 74 yards. Alexander Weiss had five catches for 48 yards.

Stars QB Boarman was five-for-15 through the air for 22 yards and one interception (by Landen Goebel).

Boarman did have two or three superb opportunities to get his team right back in the game with some late bombs, but the ball just eluded his receivers’ fingertips.

Johnson finished with 129 yards on the ground on 29 carries and one TD.