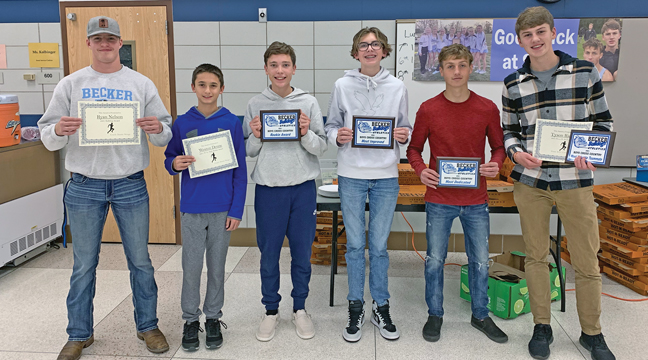 The Becker Bulldogs boys and girls cross country teams wrapped up their seasons and they celebrated with a shared awards night for the teams last weekend.

The Becker boys and girls team worked in collaboration to recognize many of the great accomplishments from the season up to that point in the year with anticipation for a successful state weekend.

“It was an enjoyable night of gathering in order to reflect on happenings during the season and to plan for the future,” said boys’ head coach Dustin Weege.

Weege started the awards event with a number of thank yous for his family, fellow coaches, the student-athletes, their families, the school staff, officials, the Pebble Creek and Community Center staff, the home meet helpers, and the wonderful fan support.

“We are so grateful for all of the folks in ‘the village’ that positively impact our student-athletes in their race of life,” he said.  “It truly takes a village to make these good things happen and I don’t feel that I can express my gratitude enough for all of the investments in the lives of these student-athletes as they continue their development.”

Weege carried on with reflections from the season and how the team developed along the way.  There was an emphasis on the reality of history being made this year with the Bulldog boys accomplishing the best-ever section finish with the fastest section average time of 17:53.04.

Also, history was made as it was the first time that two boys qualified for the state meet in the same year.

The awards program continued on with the recognition of the quality work that the student-athletes do as students as multiple members earned the “MSHSL Spotlight on Scholarship” certificate, which is reserved for students that participate in league-sponsored activities and have a “B” or better grade point average.  Additionally, the Bulldogs acknowledged Caleb Reckelberg and Tyson Ricker with All-Conference Academic awards.  Tyson Ricker earned the Academic-All-State award for his GPA and strong placement in the section meet, while Caleb Reckelberg received the Scholar Athlete patch for his impressive GPA.

For the team, coaches pointed out the boys had collectively earned the Silver Award from the Minnesota Cross Country Coaches Association and the Gold Award for the Mississippi 8 Conference for their strong team GPA (over 3.5).

“It is vital that we always recognize these guys as Student-athletes,” emphasized coach Weege as he spoke of the value of Education-Based athletics.

“These guys work hard to be successful in the classrooms and beyond and have to balance a number of things like academics, family time, jobs, fitness and more which can be helpful for helping to find and maintain balance for their futures.  I’m proud to get to work with this group of strong young gentlemen that are accomplishing a lot now and will be continuing to make positive impacts in our world through their futures.”

There were 25 members recognized on the boys team, 12 of which were varsity letter winners in the 2021 season (Ryan Nelson, Mason Becker, Ryan Boecker, Caleb Reckelberg, Tyson Ricker, Jase Tobako, Alex Kinney, Jacob Peterson, Alex Schermer, Tanner Felton, Evan Hubbard and Parker Spindler).  Lettering is accomplished through competing in one-third of the meets on varsity, being on the section championship team, or meeting the time standard of 18:30 for a 5k during the season.

“It’s an interesting year as half the letter winners were ninth and eighth graders, which is a rarity on the boys side,” said Weege.  “We’re looking forward to having almost this whole crew of letterwinners back next year as we continue to run hard and chase big accomplishments.”

For Team Awards, the team chose to recognize Tyson Ricker as the “Most Valuable Teammate,” Mason Becker as “Most Dedicated,” Thomas Cota as “Most Improved,” Parker Spindler as the “Rookie Award,” Ryan Nelson as the “Bulldog Award,” Weston Denne as “Junior High Rookie,” and Tyson Ricker again as the “G.O.A.T” (greatest of all time).

Ryan Nelson was given the mic next as the lone senior boy to share some of his insights on the season and his high school cross country career.  He spoke to the team about the value of hard work and working to not take things for granted.  Nelson had run with the “Bulldogs three” over the span of his career.

“Ryan had joined the season a little later this year as he’d been committed to military training this past summer,” Weege said. “And we were so thankful when he was able to be here as he certainly brings energy and strong examples to the team.”

“He will be missed as he continues on with his journey of training to be an electrician while also working toward becoming an Army Ranger,” Weege continued.  “He is certainly a hard worker that can accomplish some incredible things in his future.  We wish him the best.”

Next, the fellow 2021 co-captains of Ryan Boecker and Tyson Ricker came up and spoke as well.

Since the Awards night was held prior to the state meet, the team was able to send off Mason Becker and Tyson Ricker.  Unfortunately the guys weren’t able to get their state participants that night.  Another award that wasn’t yet available that night was Tyson Ricker’s All-State Award for state meet performance at which he placed 17th.

“It really was a fun season with the guys, and I am very proud of all that they accomplished as they raced well, grew together, and continued to develop as hardworking, high-quality young men,” Weege said.  “It was a pleasure to work with them and all involved with Becker cross country.  Thank you to all of the supporters and I wish you all many joys as we all work to continue to run the race with endurance.”