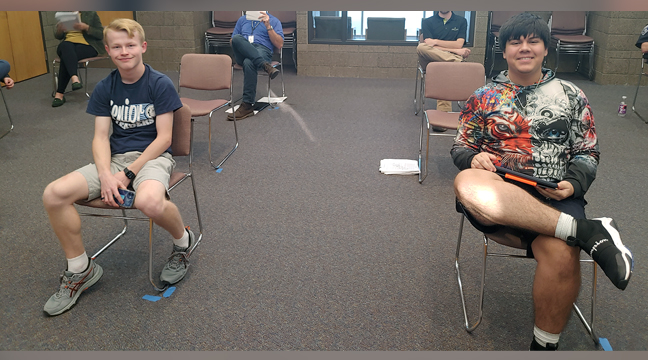 BECKER STUDENTS CAMDEN AANENSON (L) AND DAVID ZUBIA (R) attended the Becker City Council meeting Tuesday as a part of their studies for their government class. The teenagers asked some relevant and interesting questions of the staff. (Photo by Katheirne Cantin.)

The irrigation at Pebble Creek has been limping along for the last several years, with a pump failure occurring approximately once every year. This year, a pump was down for two weeks, causing the course to look pretty bad, in the opinion of council member Mike Doering. So Pebble Creek staff member Jason Scharfencamp presented a plan to the board to replace the aged pump system.

David Zubia, a Becker student attending the meeting as a part of his project for a government class, approached Scharfencamp later in the meeting, as the council members entered a closed session, and inquired whether the irrigation system would fail before the new installation, and whether previous pump failures could have been avoided. Scharfencamp replied that failures were due to the old age of the equipment, and the system is always tested in the spring to check for issues.

• A move of the condensing units to allow for excavation, due to the position of the water line;

• Move of the location of the water line;

• Additional block work to compensate for an inaccurate measurement of the foundation elevation (the foundation is three feet lower than indicated on plan drawings);

• And replacing a column that was found to be rotting at the base.

All the changes will be implemented without going over budget, but just barely.

• Heard updates from the board;

• Approved the purchase of a new squad car;

• Held a closed session to consider a real estate transaction, after which they directed staff to create a proposal.