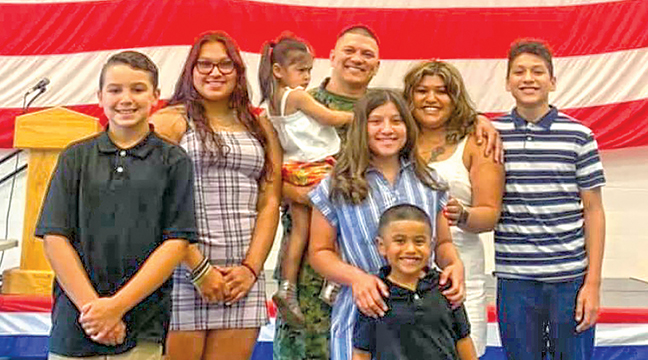 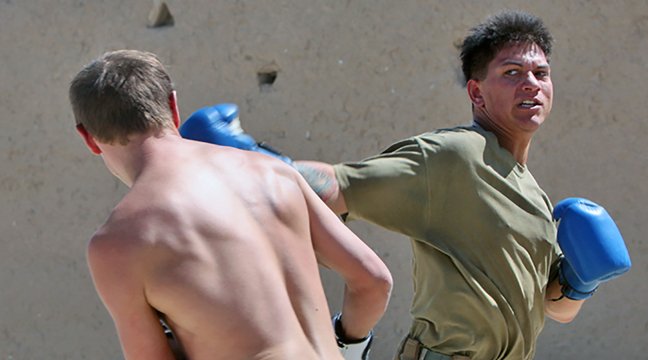 Martinez, a shining example of patriotism

As if fate threw a left hook to his face, Francisco Martinez of Big Lake decided to join the United States Marines on Sept. 10 of 2001 to pursue boxing with the armed forces.

We all know what happened the next day.

Martinez had no idea how fighting in the ring would become fighting for his country in such a short time.

Martinez was 18 years old and while boxing in a junior Olympics event, he noticed a poster asking for youngsters to enlist in the Marines and box for their country. Martinez had aspirations to become a professional boxer down the road, so he thought this would be a great opportunity to chase that dream while gaining an education and job skills.

“Boxing was the only reason I joined,” he said. “It wasn’t because I was all that interested in the military or going overseas to fight, it was simply to improve my boxing skills.”

He was planning on joining the Marines even earlier — before graduating from high school — but fortunately his family stepped in and demanded he wait until after graduation.

Little did he know, the day after he joined, the world would change drastically. And on Sept. 10, he headed for San Diego for basic training.

Martinez, 38, served 20 years and as of today is in his first full month of official retirement from the military. At 38 years old, however, Martinez is not ready to ride out the rest of his life in a recliner or a porch swing. He’s looking to continue to serve his country and his neighborhoods by becoming a different public servant.

“I’m working as a community service officer in Brooklyn Center and taking classes to finish schooling,” said Martinez. “My goal is to become a police officer.”

Martinez says the Marine Corps has taught him plenty of skills but the one he appreciates most is being trained to be a leader, a person who takes charge and gets things done.

“My drive is to accomplish things and with all the tools and knowledge I’ve received from the Marines, I’m ready to take it to the streets and neighborhoods of Minnesota.”

While in the Marines, Martinez achieved an Associates degree in general education and a Bachelors in homeland security. He’s also been a carry/conceal instructor.

During his time in five deployments while with the Marines, Martinez has survived some pretty scary moments but has not come out of his ordeal unscathed.

“I’ve had knee surgery (which has interrupted his boxing and MMA goals), ear loss and I have two bulging discs in my back,” said Martinez. “I was in a Humvee accident, two rollovers and had a grenade go off nearby while I was in Afghanistan.”

Martinez has served in the Iraqi War, Operation Iraqi Freedom, the Fallujah battles, Afghanistan and special purpose forces while in Bulgaria, Romania, Latvia and Norway. At the time of his retirement, he was classified as a Gunnery Sgt. with the title, Operations Chief. The Operations Chief is responsible to the commander and assists in all levels of planning, training, deployment and employment of MAGTF (Marine Air-Ground Task Force ) capabilities to include the integration and synchronization of the warfighting functions.

Through the years of donning the threads of the armed forces, Martinez has seen and heard a lot of positive feedback for his dedication to his country. Patriotism, of course, skyrocketed following 9/11 but despite what people may see in the news or on social media, Americans still have bleeding hearts for their country.

“I think a lot of people still embrace patriotism though some may be afraid to show it outwardly,” he says. I think some people don’t want to be categorized so they are hesitant to put it all out there. But I still think it is very strong.”

Martinez would like to see people not be so extreme when it comes to their lifestyle or practices but try and be somewhere in between.

Martinez and his family of six moved to Big Lake approximately 3-1/2 years ago after finding their dream home. He has lived in California (13 years), Las Vegas (3 years) and North Carolina (2 years) before finding a permanent home in Central Minnesota.

“We really like it here,” he says. “Big Lake has been a great home for my family.”

Martinez is married to his wife of 19 years, Anamari and they have five biological children and one adopted nephew. They have a 15-year-old daughter, Damita, twins Ayisa and Francisco III (13), Gabriel (11), Emiliano (5) and Anahi (3).

“Why’d we end up here in Big Lake?” Martinez was asked. “We were looking all over for a house for our rather large family and we were looking for a specific location. Big Lake became that location.”

Martinez — who attended and graduated from Highland Park HS in St. Paul — says if a high schooler was considering possibly joining the Marines, he warns that its not a walk in the park. Serving one’s country takes a special brand of flesh and blood.

“It’s not a job, it’s a demanding lifestyle,” he says. “You can benefit from it, but you need to embrace it, earn it and grow from it. It’s a family within a family. I went into it with a different mindset, but I came out better for that decision.”

Would he do it all over again if he got the chance?

“Without a doubt,” he says.