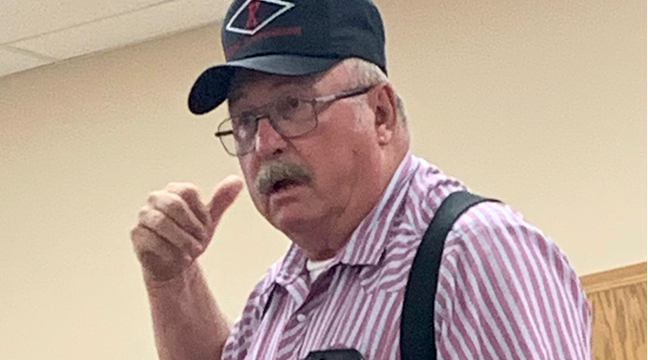 CLEARWATER TWP. RESIDENT MEL KLEIN explains his dissatisfaction with the township board during their monthly meeting. (Photo by Penny Leuthard.)

During their July meeting, Mel Klein approached the Clearwater Twp. Board to express his displeasure over not being notified that Huber Ave. was being chip sealed. He stated no one who lived on the road was asked if it should be tarred, and said he was frustrated and angry that the board didn’t have the courtesy to inform them the work was being done.

In response, Supervisor Scott Miller read from an email he had sent out in response to previous complaints he’d received about the issue, explaining the project had been in the works for at least two years and had been on the agenda several times, including at the annual meeting. He went on to say other residents had come to a number of meetings throughout that time requesting the road be chip sealed.

Miller added that due to increased traffic over the years the board decided to chip seal a number of roads, including theirs, to save taxpayers money and increase safety. Frequent grading, gravel and calcium chloride increasing costs, and environmental issues also played into the decision.

Even with the roadwork, the levy hasn’t been raised for eight years with the exception of the increase cost for the fire contract.

“We’re supposed to be keeping track of your money,” he said. “We have to weigh all the options. We feel this is a long term solution to a problem.”

Scott Zorbe spoke up, stating he’s lived on Huber Ave. for many years. He said he knew the road was going to be chip sealed and was in favor of it.

Other property owners on Huber Ave. were in attendance to express their displeasure with the decision. One stated they realize it’s too late to do anything about it now and understand they should have been attending township meetings. Even so, the group wanted additional clarification on how and why the decision had been made.

After further discussion, it was requested that the township create a procedure to notify residents when things such as this come up in the future, which the board agreed to look into.

Mary Bergeron approached the board to present further recommendations from the Nixon Lake Committee, a group of 11 residents who met to develop a list of challenges at the lake. During the township’s June meeting, issues concerning the access were brought forward. (Later in the meeting the board provided an update on how those issues had fixed, including grading the access’s slope, adding a garbage can and a stop sign at the road entrance, and updating signage.)

After outlining concerns about water surface usage, she said the committee recommended the township apply for Nixon Lake to be designated as a slow, no-wake lake. Other committee members in attendance also provided their input. Issues such as speed boats and jet skis, the size of the lake, invasive species, and the loon population led to their recommendation.

Miller said he wasn’t opposed to the idea but wasn’t willing to make a decision that night. He said he wanted time to look into details on what the township would need to do and what would happen if it were to occur.

Other attendees spoke up, some supporting the idea and others opposing it, stating they didn’t believe the lake needed to be restricted and that they wanted to see documentation of the problems that were listed by the lakeshore property owners who were on the committee. The problem with beavers, which has caused problems with the lake for the last few years, was also discussed however, as the township only owns the public access a lake association would need to be created to address the issue.

Nixon Lake will once again be on the agenda for the next township meeting.

The rebuttal to the latest orderly annexation agreement received from the City of Clearwater was approved and will be forwarded back to the city.