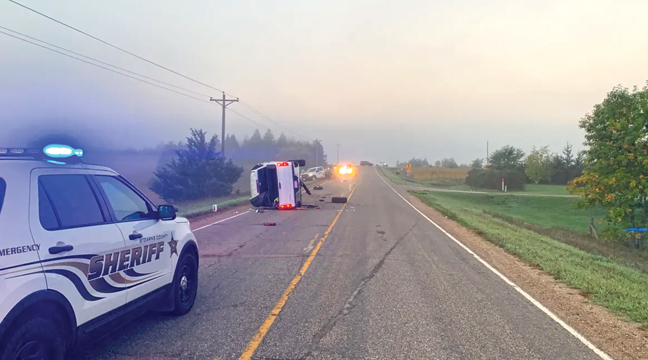 DONALD ZWILLING’S TRUCK (background) was pushed forward after impact from Jay Kangas’ truck (foreground) which caused the death of Zwilling. Zwilling, it was reported, had stepped out of his vehicle after purportedly hitting a deer. Kangas suffered minor injuries. (Photo from Stearns County Sheriff’s Dept.)

(Editor’s Note: The following article was comprised from information introduced by the Stearns County Sheriff’s Office).

A Clearwater man died after his pickup was struck from behind Monday morning in Lynden Twp. It happened on Stearns Co. Rd. 45 west of Clearwater at around 6:30 a.m.

A sheriff’s deputy came across the scene shortly after the collision on Co. Rd. 45 near 6th Ave.

Authorities say 56-year-old Donald Zwilling had been northbound on the highway and had stopped to inspect front-end damage from a suspected collision with a deer. A second pickup driven by 37-year-old Jay Kangas of Kimball was also northbound and collided with Zwilling’s truck, causing the truck to push forward, pinning Zwilling underneath, killing him.

The pickup Kangas was driving rolled as a result of the collision. He suffered minor injuries.

The cause of the crash remains under investigation, and at the time of the crash there was fog in the area, but impairment is not believed to be a factor in the crash, the Sheriff’s Office said.