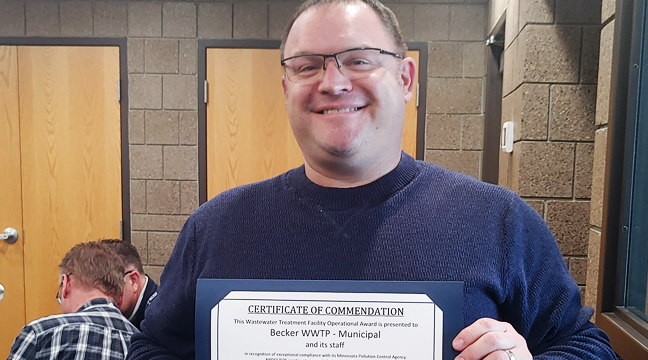 CHRIS LISSON of the public works department showed off the certificate granted to the wastewater treatment facility by the MPCA. He noted that it was the hard work of his staff which earned the facility this award. (Photo by Katherine Cantin.)

During Tuesday’s meeting, the Becker City Council approved the purchase of a new type of weapon for Becker officers.

The police department will soon be getting pepper balls. Pepper balls are the only law enforcement weapons that are designated “non-lethal,” as opposed to weapons such as tasers, which are designated as “less lethal.” The weapon consists of a CO2 launcher, similar to a paintball gun, with pellets which contain an irritant similar to pepper spray. The pellets can be shot directly at a suspect with little damage, or else can be shot at the groud to saturate the air. Officer Lindbloom noted one instance where a suspect was standing off with the police in his car, so the officers shot a pepper ball into the vehicle, and the suspect surrendered after a few minutes.

The pepper balls, unlike some less-lethal weapons, allow the officer to maintain distance from a suspect. The weapons are painted bright yellow to distinguish them from other weapons, and they will be kept in officer vehicles.

Officer Chris Lindbloom of the Becker Police Dept. presented changes to chapter 10 of the city code. At the last regular meeting, council members called for a public hearing regarding these changes, many of which simply update city ordinances to match state code and adjust how police officers can give citations for certain violations.

No one came to speak at the public hearing, and so the changes were accepted.

In Other News, the Council:

• Traded in a dura patcher for a trailer mounted patch unit with infrared patching heater;

• Awarded a bid for street projects in the industrial park.