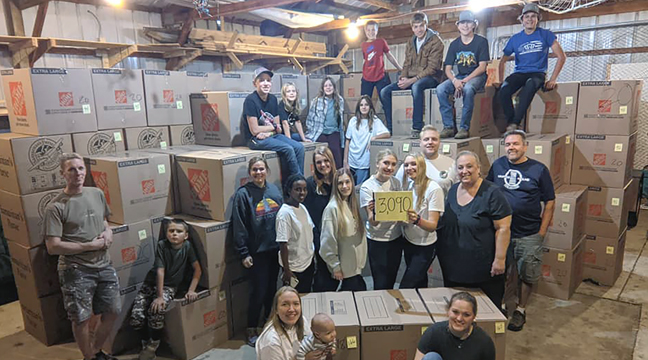 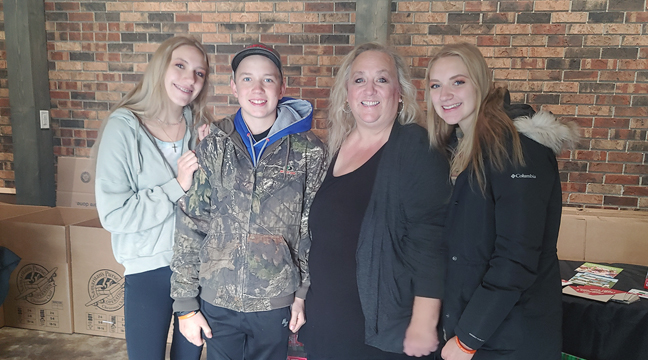 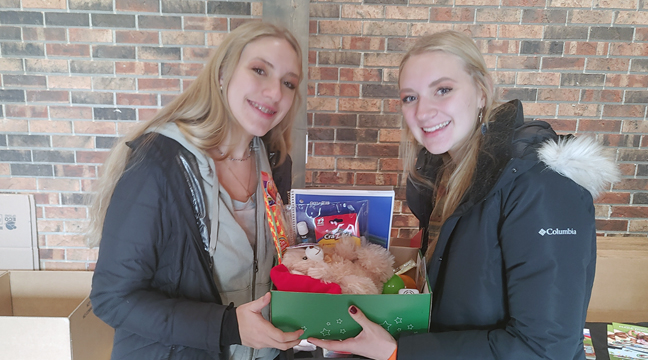 Previous Next
PACKING PARTY! The Friedmans, along with many of their friends, packed over 3,000 boxes for Operation Christmas Child. (Submitted photo.)
MEMBERS OF THE FRIEDMAN FAMILY posed for a photo. From left to right is Alyssa, Johnny, Christina, and Rainna Friedman. (Photo by Katherine Cantin.)
SISTERS ALYSSA (L) AND RAINNA FRIEDMAN (R) decided to send more gifts to kids around the world than ever before with Operation Christmas Child. (Photo by Katherine Cantin.)

History with the Project

The Friedmans have been involved with Operation Christmas Child since the project began in the 90’s. Normally, they would do two or three boxes. However, in 2015, they decided to go bigger and did 37 boxes. The year after that, they went for 100. The number of boxes the family contributed ramped up over the years until they were contributing 1,000.

Rainna and Alyssa, two of the Friedmans’ daughters, decided to take things up a notch this year. After praying on the project, they both felt God calling them to do more boxes, and they were determined to get the project done no matter what.

This is not simply a packing project, however. The girls spent many nights awake, sewing handmade goodies to put in the packages. The girls relied on their family, including their many siblings who live all over the country, to help them purchase materials, spend time sewing and packing, and reporting where good deals on goodies and supplies could be found.

Anytime the Friedman girls found a good deal on toys or materials, they sent out a message to their family members across the country. Within minutes, the girls would have the funds they needed to buy the supplies they needed.

This year, they made it their mission to include certain items in every box, including a jump rope, a tote bag, a clothing item, assorted toys, a toothbrush, school supplies, a cross, and a stuffed animal, to name a few.

The family almost was unable to include a stuffed animal in every box. They ended up being $1,000 short. However, a family friend donated $1,000 to the project in their brothers’ name, and they were able to go to the dollar store and purchase the rest of the stuffed animals.

The Friedmans were able to complete this project despite a recent loss in their family. Their son, Teddy Friedman, recently passed away. Teddy was serving in the military out of state when he contracted COVID-19 and died from the disease.

His mom, Christina Friedman, confessed that it was almost a help to have the project.

“I wasn’t going to be sleeping anyway,” she said. She stated that there were many late nights where she was up sewing goodies for the boxes while crying her eyes out.

Thanks to the Community

The Friedmans are a large family with lots of friends in the area and around the country. They recounted many stories about the support they received for their project and their recent loss. Many pitched in whether they donated money or flew in from other states to help with the packing. They ended up completing 3,090 boxes.

Alyssa and Rainna Friedman masterminded an amazing project with the help of their friends and family, and will certainly go on to do many more spectacular things.