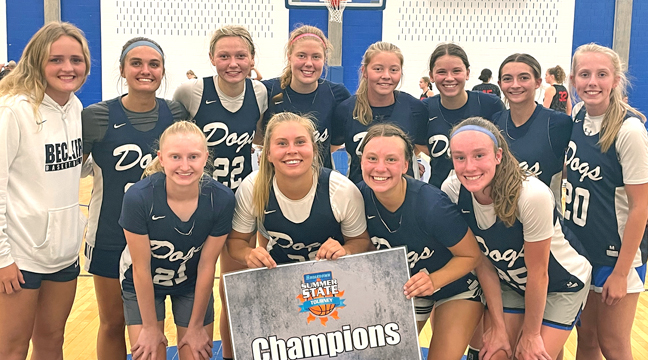 According to Head Coach Dan Baird, the Bulldogs defeated Hutchinson, Orono, and Stewartville all in convincing fashion en route to the title.

The Breakdown summer state championship series brings to an end the open contact period for coaches and athletes during the months of June and July. Starting in August, the teams and coaches are once again bound by MSHSL rules that dictate no organized team practices or contests until the start of the season.

In the championship game in Class AAA, Becker won 72-48 over Stewartville.

“Our defense was the key in that game,” Baird said.  “We made everything tough on the opponents and wore them down with our stifling half court man to man defense and timely three point shooting on offense.”

The team is now off until the official start of practice in November, although many of the participants will be competing for other Bulldog teams in the fall sports season.