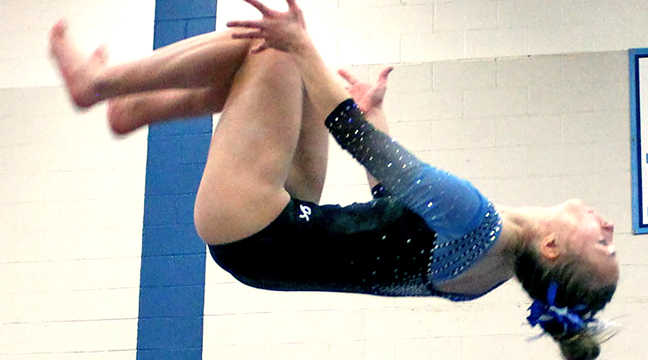 Bulldog Emma Hennessey showed off her backflip as part of her beam routine earlier this season. (Submitted photo.)

The Becker Bulldog gymnastics team put together a strong first half of the season and earned a berth in the Class A True Team State Championships (January 21). Because Becker was ranked sixth in the latest Class A ratings, this secured the team a spot in the true team finals.

“I couldn’t be more proud of the hard work this team has done to reach this amazing accomplishment,” Coach Jen Harmoning said last week after the team’s conference win over Chisago Lakes. “We have a little over a week now with no competitions, so we will be working hard to get well, heal nagging injuries, and prepare to come out strong for the final weeks of our season.”

Last Tuesday, the Bulldogs fought through fatigue to score a 132.575 to 131.025 victory over M8 foe Chisago Lakes and remain undefeated in conference action.

“We traveled to Chisago Lakes for our third meet in six days... as expected, the gymnasts were feeling pretty tired from the past week,” Harmoning said. “Even though they were weary and we were down several gymnasts due to injury and illness, the team put forth a good effort and was able to come away with another conference win.”

Karli Kirk led the team on the vault, scoring a first place finish with her personal best time of 9.4. She was followed by Emma Hennessey (third - 8.85) and Lillian Bonsante (fifth - 8.425).

Beam was the next rotation and Hennessey finished second overall with a score of 8.675, while Alison Woodard was third overall (8.25) and Kirk was fifth (8.0).

Hennessey continued her strong performance with a second place score (8.5) on the final event - floor - while Kirk and Cassie Larson tied for fourth (8.325).

Harmoning was pleased overall with the win, as she highlighted her team’s depth as a strength heading into the half way point of the season.

“We have had a lot of kids stepping up to fill in holes left due to injuries and illnesses,” Harmoning said. “Every one of these athletes has been doing a really wonderful job under pressure and I’m really proud of their efforts.”

“We have been working really hard to continue to upgrade our routines with some more difficult skills,” Harmoning said. “This has been challenging with the extreme lack of practice time, but we have still managed to try some new things. I’ve been really happy to see some of the gymnasts willing to try new things. It doesn’t always go well at first, but it’s important that they push themselves out of their comfort zones in order to take a step forward.”

Complete details of Becker’s True Team State results will be covered in next week’s Patriot. 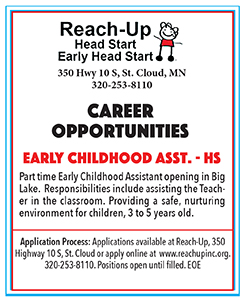