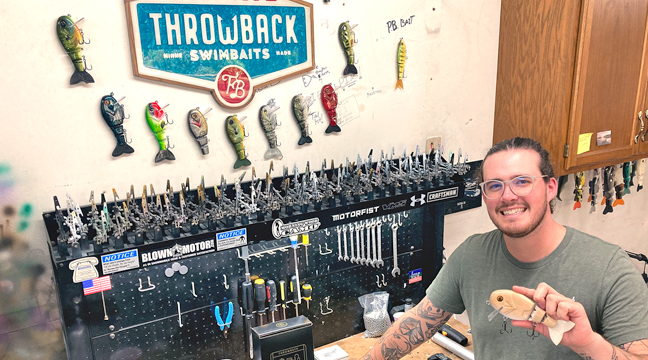 Becker High School 2014 graduate Kyle Buchholz has made a name for himself in the fishing lure industry with his handmade swimbaits. He is pictured here with the first lure he ever produced, as well as the custom molds used to make it. His baits are fished by anglers all across the United States. (Photo by Mark Kolbinger.)

Kyle Buchholz is an artist and entrepreneur whose determination and moxie has led him on a path to becoming one of the biggest names in the fishing lure industry in less than two year’s time.

His company, Throwback Swimbaits, is gaining national attention as a producer of high-quality, handmade swimbaits that are used by some of the top guns on the fishing circuit. They are also highly collectible lures, with some customers having no intentions of tossing the masterpieces into a body of water.

Right after high school, Buchholz put his artistic flair to work for the Minnesota Vikings, as he worked four seasons for the team utilizing his video editing and producing skills.  During that time, he also built a highly successful photography and videography business, Stills ’N’ Motion, that captured a huge audience in the Minnesota wedding industry.

But then came the spring of 2020 and with COVID-19, the wedding bookings completely disappeared.

“It was in September of 2020 and the weddings had completely disappeared,” Kyle says. “I had started fishing with swimbaits and I’m entrepreneurial by nature so I knew I needed to start something.”

He started by carving a lure body out of wood and then progressed to making a mold so he could make a resin copy of the lure. By his own admission, it took a lot of trial and error.

“I went down a massive rabbit hole on the internet, looking at a lot of different things to see what would work best,” Kyle says.

Buchholz branded his company as Throwback Swimbaits and his market includes anglers, as well as collectors. It’s more than a lure company, as he takes great strides to ensure that he is branding the concept in a way that honors his own legacy.

“The box that the lures come in has a picture of me and my grandpa sitting on the dock,” Kyle says. “I’m not just a bait builder, but we are a brand as well.”

In addition to the lures, Buchholz also offers a line of clothing and accessories that sport the company’s logo.

The name is a nod to Kyle himself, who says he has always felt he was “older” than his age - in other words he is kind of a “throwback” himself.

“There’s guys who have caught eight to nine pound bass on it in Texas,” Kyle says.

He’s also produced Bunnies, which are a wooden top water bait, as well as a Flea Shad, which is a lipless swimming bait.  There’s also the Crackdown version, which is a deep diver, and the Mob Walker, a larger bait that can target Muskies and Bass. Currently, he is developing a two-piece Glide-bait.

In terms of collecting, his lures are drawing strong interest from a market share of people who like to display the unique art pieces in their signature boxes.

“There’s one man who has already collected 62 different baits,” Kyle says.  “He has every color pattern we have ever produced and he says he is just getting started.”

His background in photography and video editing is also a big part of the business, as Kyle maintains a booming social media presence.

“My Instagram account has been a big help and has helped us gain notoriety,” Kyle says. “I will drop a new batch of lures and will get over 50 new customers who reach out and want to buy one.”

Kyle has a partnership with several influencers and fishermen who promote his lures all across the United States, including Marshall Arnwine, the self-proclaimed “homeless fisherman”.

“He’s been a huge part of the business since I reached out and sent him a bait to use,” Kyle says.  “He got the bait and kept fishing it and he’s caught a ton of fish on my lures.”

Kyle says there is nothing more important to him than family, and those values are obvious in his business plan. His wife, Nicholette, and their children are all active helpers in the business, while Kyle’s mother, Linda, is his only full-time employee.

Together, they create handcrafted masterpieces that sell out sometimes within minutes of when the batches of 75 to 100 lures are posted for sale.

“We are definitely a niche market, but it’s great that we are being sought out by so many people,” Buchholz says.  “There’s nothing better than hearing from our customers about how many fish they have landed with our baits.”

Buchholz has plans to build a new workshop in the future and to increase his production capabilities, but he says his company will always focus on the highest levels of quality and personal attention.

Until then, he has a plan to head back to his roots and thank some special people who inspired him to follow his entrepreneurial spirit.

“I’m planning to head back to Becker and thank my three high school Industrial Tech teachers - Eigen, Zimmer and Jurek - I definitely wouldn’t be where I am today without those guys,” Buchholz says. “I never thought of myself as a college type student but they encouraged me that I was good with my hands and that there was more out there for me. I’ve built several very successful businesses off what they taught me.”

For more information on Buchholz, check out his website at ThrowbackBaits.com.