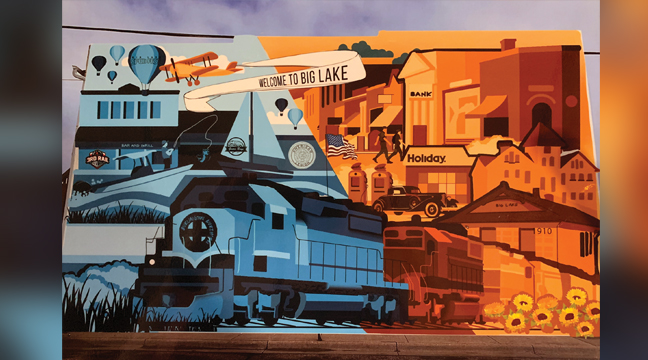 THIS IS THE PRELIMINARY ARTWORK designed by Artist Allison Hunsley to be painted on the exterior surface of the building at 59 Lake Street in Big Lake. Hunsley hppes to begin the artwork in the next few months once the City of Big Lake approves. (Patriot Photo by Bill Morgan).

Area organizers in Big Lake are fundraising to create a stunning mural for the bulding at 59 Lake Street, right along the railroad tracks.

George Quinn is spearheading the drive for the mural and is currently working with the City of Big Lake to make the splendid visual a reality.

Quinn has procured the talents of 23-year-old Allison Hunsley, a St. Michael/Albertville artist who is best known for her floral mural on the Clarence McCarty’s building in Monticello and the “cogwheel” on the Rustech Brewing building, also in Monticello. Her first mural occured in 2018 on the Second Hand Rose Antiques building in Buffalo.

Hunsley was commissioned to come up with a scene that integrates Big Lake’s past with the present and the future. Her pre-design so far includes key tributes of the railroad, main street, the old school building, the post office and the Burlington Northern train. She integrated that part of Big Lake’s history with modern scenes of fishermen, a sailboat, sunflowers from the Fish garden, a biplane, hot air balloons and mentions of local businesses who contributed to the funding of the mural. The design is a start, and most likley will be tweaked and altered as the planning and staging continues.

Unfortunately, Quinn and the fundraisers have hit a bit of a snag with the City of Big Lake as the Planning Dept. had reservations for the mural project, telling Quinn the art was a “sign” and would require a Conditional Use Permit and a variance. Quinn suggested the business names being removed, but the city planners still told him the artwork was considered a sign and was subject to current city code which Quinn has balked at, worried that “if the CUP is ever rescinded, what happens to the mural?”

In Subd. 6 of Chapter 13 of the Big Lake Code Book — it states: Signs that are painted directly on the surface of a building may be permitted in business zoning districts provided that a conditional use permit (City Code Section 1050 Conditional Use Permits) is approved by the city. The area of painted wall signs shall be calculated as part of the maximum total permitted wall sign area for the building.

In Subd. 7, it states: Signs that are on the wall of a commercial building that does not abut a public street or is otherwise not permitted by this ordinance, or was not approved through a sign plan review prior to construction of the building, may be permitted in business zoning districts provided that a conditional use permit (City Code Section 1050 Conditional Use Permits) is approved by the city. The intent of this permit is to allow a sign, with conditions, that is visible from other commercial properties or high-traffic areas and is not primarily viewed from residential parcels. The allowable area of the secondary sign shall be reviewed with the Conditional Use Permit application, but may not exceed the actual area of the primary business sign.

Hanna Klimmek, Interim City Adminstrator, provided the Patriot with the following statement: The mural that George Quinn and The Third Rail have been working on is something that our City Code doesn’t acknowledge at this time. Current Policy requires that both a Conditional Use Permit and a Variance be approved by the City Council to allow for the mural to be painted on the privately-owned building, which resides in the business zoning district. With that being said, the property owner could get this approved but would have to go through a process in order to do so. The City of Big Lake is working to repeal and replace three chapters within the City Code, which include the Subdivision Ordinance, Zoning Ordinance, and the Sign Ordinance. The Code Revision Project will provide a great opportunity to include murals within City Policy.”

Quinn disputes the “sign”, “mural” conditions set by the city since “they have a mural in the city and it’s called the Freedom Rock”, he said. “City planing commission members and city council members donated to the Freedom Rock Mural Project..”

In the meantime, Quinn and his colleagues vow to continue their planning and scheduling of the mural painted on the building by artist Hunsley, who Quinn said most likely will begin preparing the wall for the artwork later in the summer or in the early fall.

To help fundraise for the mural, Third Rail Grill in Big Lake held a “Heat Wave/Movie Night” Monday, offering free soda pop and water to seniors, veterans and first responders due to the sweltering heat forecasted for that day. They also were offering free billiards and board games to any guest and then that evening showed the movie Blazing Saddles on their large TV in the main area, with all proceeds going to the fundraising efforts of the mural.