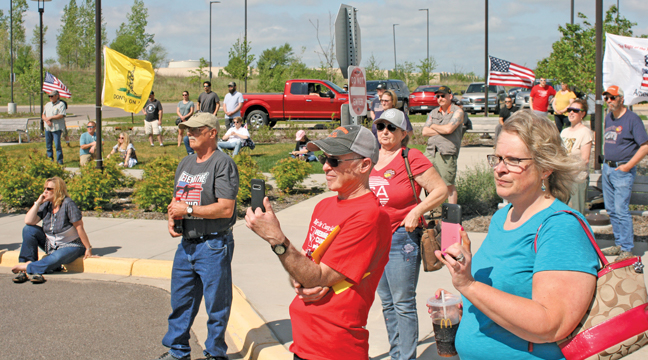 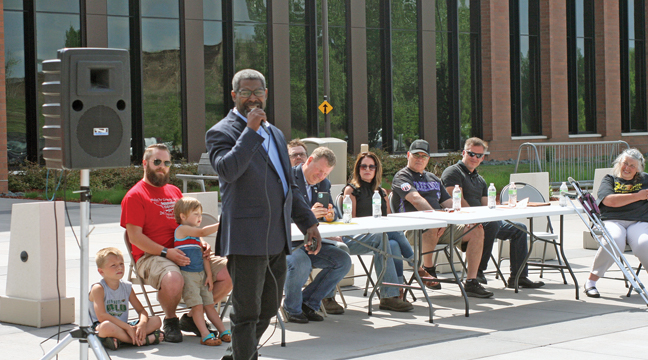 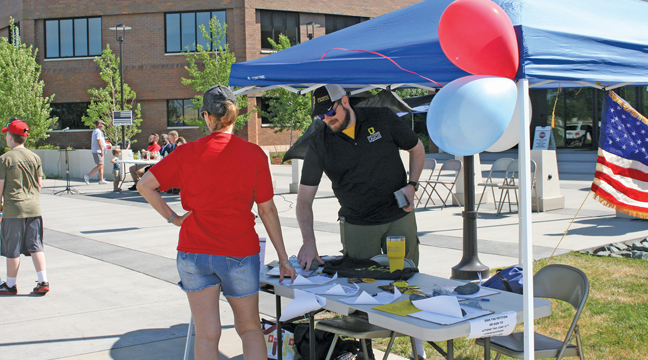 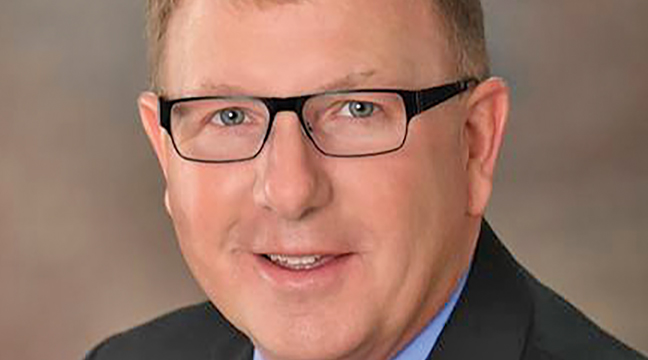 Previous Next
Big Lake resident Jim Bonin, center in red shirt, listened intently as he used his phone to record one of the speakers last Saturday at the Sherburne County Government Center. Bonin serves as the de facto leader of the Sherburne County Second Amendment Defenders group that is trying to convince the county commissioners to adopt a resolution in support of citizens’ rights to carry a firearm (Patriot photo by Mark Kolbinger).
The Reverend Tim Christopher, Founder and President of the Shepherds Works organization, addressed the crowd and shared stories of his daily crusade to fight for his right to keep and bear arms as he tries to make a difference in the metro area (Patriot photo by Mark Kolbinger).
Rob Doar of the Minnesota Gun Owners Caucus greeted residents and urged them to sign the petition calling for Sherburne County to adopt a resolution prohibiting the county from appropriating any funds for the confiscation of firearms. Doar later addressed the crowd and tried to debunk misinformation he says he has heard as he travels Minnesota to urge similar resolutions (Patriot photo by Mark Kolbinger).
State Representative Paul Novotny addressed the crowd during the rally and called for conservatives to make their voices heard in support of the right to carry firearms (Patriot photo by Mark Kolbinger).

Sherburne 2A Defenders hold rally at the Government Center

Approximately 80 residents turned out last Saturday for a rally in support of the 2nd Amendment and to urge the Sherburne County Board of Commissioners to adopt a resolution in support of their cause.

Big Lake Resident Jim Bonin has been leading the charge for the group since January 2020 when State Rep. Shane Mekeland sent a letter to the commissioners seeking their support and adoption of the language.  Saturday’s rally was the latest in a series of actions the group is taking in preparation for the Board of Commissioners meeting June 15, when supporters plan to speak and urge the board to consider approval.

Former State Rep. Jim Newberger served as emcee for the hour-long event and he introduced a litany of speakers who urged the crowd to get involved and make their voices heard.

Elk River city council member Garrett Christianson spoke of the importance of local government in protecting the 2nd Amendment, stating that it is “not just a Federal and State issue.”  He further stated that he understands “how important it is to be able to protect my family”.

Also addressing the crowd was Rob Doar, Vice President and Political Director for the MN Gun Owners Caucus.  As part of his duties, he said he travels around the state and helps groups of citizens petition their county officials to adopt the resolution, noting that so far 20 resolutions have been adopted in Minnesota, including 11 that have strong language in favor of 2nd Amendment rights.

Nationwide, according to the website, sanctuarycounties.com, as of May 6, nearly 1,500 of the 3,006 total counties are second amendment sanctuaries by virtue of resolutions or ordinances at the state or county level.

Doar spoke of three myths he says he hears about in relation to the language in the resolution, including from certain Sherburne County Commissioners.

The first is that county law cannot nullify State or Federal law.

“That’s true, but nothing in the resolution does that,” Doar said.

The second misconception he cited is that people think the 2nd Amendment already protects a citizen’s right to carry a firearm.

“It’s not settled law and there are examples from across the country where these rights are eroded,” Doar asserted.

Finally, he argued that some officials voice their opinion that the resolution is symbolic in nature and doesn’t hold weight.  It’s another area that he insists is not accurate.

“This resolution will not allow county funds to be used in confiscation of firearms and also states that the county will use the court system to defend the rights of citizens as necessary,” Doar said.  “When counties affirm that they will use the courts to protect citizens that is a bold statement.”

2020 Sherburne County Commissioner candidate Andrew Hulse spoke to the crowd about the importance of the Constitution of the United States and also of electing local candidates who will support the 2nd Amendment.  Hulse ran against Barbara Burandt and lost the election by 233 votes.

“Our local officials take an oath to defend the constitution,” Hulse said.  “We need officials that look at that oath as more than a photo-op when they get sworn in.”

2020 Commissioner candidate Anne Kostrzewski also addressed the crowd, thanking everyone for their past support.  Incumbent Commissioner Tim Dolan kept that seat in the last election by more than 1,700 votes.

Mekeland held up a copy of the resolution as he addressed the crowd and kept on the theme of the importance of local elections.  He spoke of the history of the resolution, which he first sent to Sherburne County in January of 2020.  He says he was disappointed that the language wasn’t adopted at that time and vowed to keep pushing the issue with the current board and future ones if necessary.  In last fall’s election, the 2A Defender’s group put forward candidates who he felt were more supportive of the resolution.

“We tried to replace three of them (commissioners) and two were winning until 2:45 in the morning (of the last election),” Mekeland said.  “I’m not sure what happened there.”

He exhorted the crowd to “keep up the pressure and keep showing up.”

The speaker who garnered perhaps the loudest cheers of the day was the Rev. Tim Christopher of the Shepherds Works organization, a metro area group that conducts food drives and supplies basic needs for the homeless and Veteran population.

Christopher railed against the Democratic Party, noting that he believes the group has failed the citizens of Minnesota.

“I go into buildings they won’t go in . . . I walk into alleys they would never walk in,” Christopher said.  “I have to fight them every single day to keep my firearm but the thugs are keeping their firearms.”

Christopher contended that he is in the trenches every day and he went on to warn the crowd that downtown is a dangerous place.

“If you’re not carrying when you go down there you’re crazy,” Christopher said, as he warned that the bloodshed could easily spill over to Sherburne County.  “The media isn’t telling you guys what’s going on . . . the media lies and they protect the Democrats.”

He went on to deride Gov. Tim Walz, Mayor Jacob Frey and the “clowns” on the Minneapolis City Council for their efforts to defund and disband the Police Department.

“They have no clue what they are doing,” Christopher said.

Christopher thanked the group for having him at the rally and left the crowd with another lively description of his beliefs.

“I’m a reverend and the one thing the Democrats hate is for a black reverend to have a firearm and to want to fight for our second amendment,” Christopher said.  “I understand how important it is to protect my family, to protect my property and to protect the people around me.”

State Rep. Paul Novotny followed with some comments of his own and he said he disagreed with Christopher on one point.

“I think Gov. Walz knows exactly what he is doing . . . he is purposely dividing and putting a wedge between us,” Novotny said, noting his 33 year career in law enforcement and as a firearms instructor.

Novotny urged all conservatives to come together to work towards common goals and for the adoption of the resolution, noting that it is possible if more people work together.

“Conservatives take care of themselves and we are not afraid to speak our own minds,” Novotny noted.

Newberger ended the program by noting that he has heard information identifying Sherburne County as the highest per capita in the state in relation to permits to carry and firearms ownership.

He also noted the importance of 2nd Amendment related legislation, such as the 2015 bill that prohibits the State of MN from confiscating firearms during a declared emergency.  Despite the arduous task in getting that bill passed, he noted how it was vitally important with the State of Emergency that’s been declared throughout the past year.

At the conclusion of the rally, Bonin shared his thoughts on the rally, the resolution process and where it has taken him over the past nearly 18 months.

“The whole goal of our group is to get the resolution passed,” Bonin noted.  “I’m trying to get people fired up a bit because we are a significant percentage of the population and we need to get those people to come out and show who we are.  I think it makes a strong statement to the Federal and State government when they see all the green dots on a map of the United States (signifying the 2nd amendment counties).”