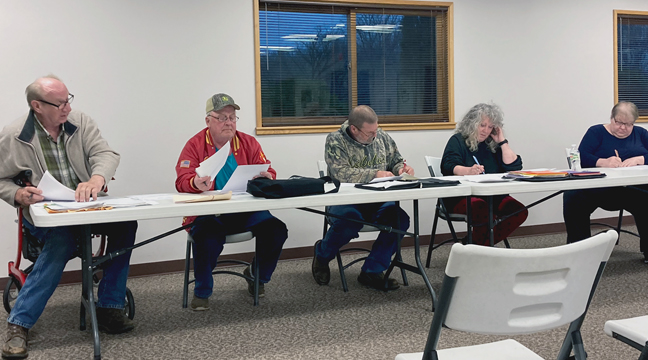 Santiago Board to seek bids for building repairs

The Santiago Twp. Board met last Wednesday and breezed through the agenda, which included the consideration of several repairs for the Town Hall.

The brick moulding around the base of the building exterior has been problematic for some time and last year the board had local contractor Mike Peterson repair a section by replacing it with a more sturdy metal siding. The board felt this had worked well would like to remove the rest of the brick, while also addressing the issues with the base of the sign in front of the building.

Because the expected cost will exceed $10,000, the board will be seeking bids to accomplish the two tasks. Contractor John Herbst also mentioned that it would be prudent to install some concrete pillar barriers near the sides of the building where the Fire Department is located to provide an extra layer of protection between the parking lot and the siding. These core filled concrete barriers would fit well into the site plan without disturbing the water and sewer lines.

The board agreed and instructed Clerk Kathy Woolard to work with Matt Weber to develop a materials list and project scope that can be used to advertise for bids at next month’s meeting.

Sgt. Andy Ochs was at the meeting to discuss last month’s 69 calls for service, which included 30 traffic stops and two fires. The supervisors asked Ochs for an update on the dynamic speed signs that are supposed to be installed on County Road 11 through town and he said he will have an update for the board next month.

Road supervisor Dave Jehoich presented a pair of documents to be signed by the board relating to the work being done on 67th St. Herbst indicated that MPM, the contractor for the project, was looking at a mid-June date for the commencement of the work.

Jehoich also noted that Astech had submitted a bid of $62,530 for the crack sealing projects that are slated for 2022. Combined with what had been accomplished last year and is on the table for 2023, this would bring most of the tar roads within the township into good repair. The board approved the bid and also gave the go-ahead for the seal coating on a portion of 19th St.

Shelly Jehoich gave a report on Clean-up Day and noted that 60 cars came to the event, down from 107 a year ago. The weather may have played a role in the downward attendance trend, as storms and rain plagued this year’s event.

A total of 31 mattresses and large pieces of furniture were collected, however, and this was a positive since these are the types of items that people sometimes discard illegally in road ditches.

Over 10 volunteers helped with the duties that day and $1,800 were collected. The Santiago Lions were thanked for their donation of coffee and donuts, while Bailey Ray’s was recognized for bringing pizza for the workers.

“We had a lot of good people helping,” noted Board Chair Jeff Pappenfus.

During the open forum, Gary Gray was on hand to introduce himself to the board and residents. Gray, long-time Clear Lake Twp. Board member, announced that he was planning to file for the Sherburne County Commissioner seat being vacated by the retirement of Felix Schmiesing. Members of the audience asked questions of Gray relating to solar farm development, as well as the zoning and classification of agricultural and commercial properties.