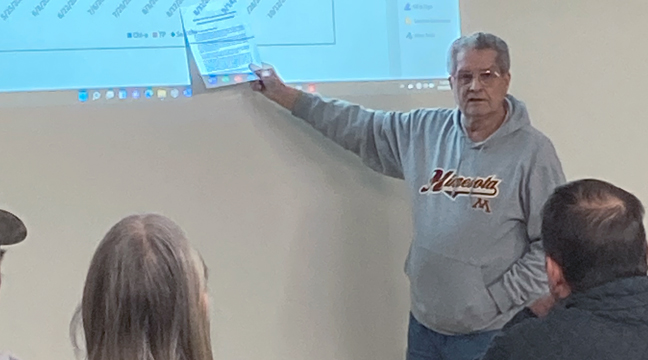 Walt Munsterman presented a plethora of data regarding the water quality on area lakes during Monday’s Palmer Township meeting. (Photo by Mark Kolbinger.)

Volunteers take readings of the area lakes throughout the summer, as measurements recorded include Total Phosphorous, Chlorophyll a and water clarity. Next year, Munsterman said his group is considering also testing for Blue-green algae, a toxic substance that can be fatal to pets.

His report indicated continued progress, albeit slow, in improving the water quality on the lakes.

“We must remember that it has taken many years for the lakes to deteriorate to the point of being placed on the impaired waters list and it will take many years to get it off the list,” Munsterman’s written report indicated.

One of the reasons touted for the improvements in water quality is the amount of shoreline restoration happening around the lakes, while this year’s extremely low water levels did contribute to what is hoped to be a temporary increase in the Total Phosphorous readings on all the lakes.

According to Munsterman, there was little “flow through” of the water in the lakes this year because of the drought. This means that it took much longer than usual to change over the water located in each lake.

The presentation included historical data regarding the lakes, as well as a very detailed analysis of the readings from the past summer. Munsterman asserted that what the testing proved this year was that the Phosphorous levels increased not from farmland runoff, as many may have assumed in the past, but because of the human activity around the lakes.  Homeowner fertilizer applications, as well as deep wake boats churning up the bottom of the lake bed could both be culprits in the increased Phosphorous levels.

“It came from us, the residents,” Munsterman said. “The TLID is closely watching the research on wake boats as well to see what effect they might have on our lakes.”

The issue with excess Phosphorous in lakes is that it increases the algae bloom, thus negatively affecting water clarity and leading to increased levels of Chlorophyll a.

Munsterman ended his presentation by giving an update on invasive plant species monitoring on the lakes and by joking that beaver activity on Lily Creek could also have an effect on water levels in the future, as the busy critters are establishing at least two dams.

The board thanked Walt and the rest of the volunteers for their efforts.

Several representatives of Ice Day were present to discuss parking options and logistics for the popular event scheduled for February 12 on Lake Julia.

One major concern is the amount of traffic generated by the event and how to discourage attendees from parking on the ice.

On the roads around the lakes, the township has very little right of way and so several landowners will be contacted about allowing parking adjacent to the roads on private property.

In addition, parking along 115th was discussed, as a possible solution might be to have flag bearers at each end of the stretch of roadway to turn it into a one lane road for the hours of the event. This would allow for parking on one side of the road and traffic safety would be handled similar to a road construction zone.

The possibility of providing a shuttle from the Town Hall parking lot was also discussed and may be explored.

The goal of the Ice Day committee is to make it a sustainable event for years to come, as well as to continue its current focus on safety and cleanliness.

• Heard a report from Commander Bob Stangler of the SCSO, noting 72 calls for service in December, including five medicals and several snowmobile complaints;

• Updated the public on salting and sanding efforts to be made with the warmer weather forecast for this week;

• Heard a report from CLFD Captain Ryan Peterson, who noted six medical calls and three mutual aid fires from the last period.  Peterson also asked for and received permission to create a helicopter landing zone for potential medical evacuations on a vacant lot near the Town Hall, as this would be safer than having to close a roadway in the event of a major medical situation;

• Reported that the snow plow policy will be reviewed in February and the Palmer Park ski trails will be groomed soon;

• Received a quote for some new playground spring toys and will work with the Clear Lake Lions on a possible purchase and installation at Palmer Park;

• Heard a report from Supervisor Steve Demeules about ongoing work being done on the possible acquisition of the 40 acre parcel known as the “Wipper Pit.”  Demeules reported that he is working to coordinate an appraisal of the land, and after that and other information is gathered, an open house will be scheduled for the future to gather resident input into the possible land purchase;

• Decided to seek RFPs for maintenance for the back-up generator at the Town Hall;

• Discussed revisions to the “High Water” ordinance, provisions for enforcement and a plan to discuss and adopt the new language at the February meeting. The new language will cover Rush Lake, Briggs Lake, and Lake Julia.