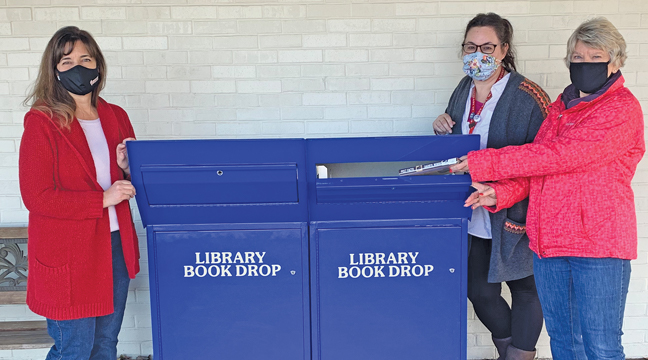 The Clearwater Public Library is welcoming the public with a brighter, more colorful appearance – its old, rusty book drops outside its front door have been freshly painted and lettered.

The refurbishing was sponsored by the Clearwater Area Friends of the Library (FOL). Although the nonprofit group hasn’t been able to actually meet for months, its members wanted to continue fulfilling the organization’s mission of assisting the library, its patrons, and the community. They reached out to staff, asking what the FOL could help with in the limited capacity that’s open to them during this time.

The answer? Paint the two outside book drops, which were dingy, dirty, and rusty. A rich, deep blue color was chosen to match the trim of the building where the library is located.

The painting and new lettering were done by Clearwater’s Interstate Automotive, which first picked up the heavy, metal book drops, and then transported them back to the library when they were finished. The pieces were bolted in place by the City of Clearwater.

“I want to thank the Friends of the Library for their continued support,” said Clearwater Librarian Shelly Kuelbs. “The book drops look so much better, and we’ve had good feedback from the community.”