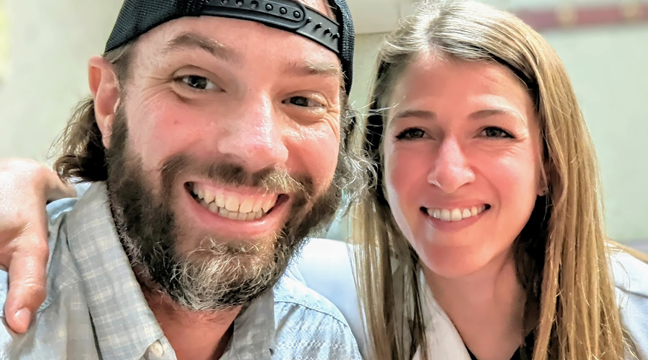 Sherburne County Commissioner Tim Dolan is alive today because of the skill and precision of his cardiothoracic surgeon, Dr. Amanda Stram, who just happens to be his high school classmate from Grand Rapids. (Submitted photo.)

Sherburne County Commissioner Tim Dolan’s story of survival has all the makings of a Hallmark Channel movie. A supportive family, a skilled surgeon and plenty of luck (or fate) thrown in just to make the plot more intriguing. Other story highlights would include a period of amnesia, a grueling 12 hour surgery, and a pair of unlikely life assists from both a high school classmate and COVID-19.

The surreal story begins on May 17 during a regular meeting of the Sherburne County Board of Commissioners, which was followed by a board work session. At about 10:15 a.m. that morning, Dolan began having trouble breathing and says he “just didn’t feel right”.

“So I told Bruce (Messelt, the Sher. Co. Administrator) that in between the meeting and the workshop, I was going to run over to the clinic,” Dolan says.  “I had tested positive for COVID-19 six days earlier and I wanted to make sure it wasn’t related to that... if it hadn’t been for COVID, I would have just gone home and went to sleep.”

That would have proven to be a deadly decision, as the reason for Dolan’s discomfort was in fact an aortic dissection.  More on that diagnosis in a bit.

Dolan doesn’t remember leaving the meeting or driving to North Memorial Urgent Care in Elk River.  By the time he arrived there, he was delirious and kept repeating “10:13” - an apparent reference to when he started feeling ill. All the while, blood was pouring into his chest cavity and restricting his ability to breathe.

Amazingly, he also doesn’t remember the rest of that day, which included a 12 hour marathon surgery, or most of the next two weeks as he recovered from the open heart procedure that saved his life despite having perhaps a 12% chance of survival.

Dolan shares the details of the ordeal after piecing things together from the medical staff and others who all played a part of saving his life that day.  Those cast of characters just so happen to include his high school friend, Mandy, better known today as Dr. Amanda Stram, the cardiothoracic surgeon who was coincidentally working at North Memorial Hospital when the ambulance came speeding in with Dolan in the midst of a serious medical emergency.

“Tim had an acute type A aortic dissection, which is a tear in the layers of the aortic wall where it arises from the heart... this is a life-threatening condition and treatment is emergency heart surgery,” Dr. Stram says. “Tim’s dissection also involved the aortic root, which holds the aortic valve, and so his valve was leaking a lot. I had to replace his aortic root, aortic valve, and his ascending aorta up to the level of the aortic arch. To do this, we had to put him on the heart and lung machine, cool his body and even shut off the blood flow to his organs for a period of time.”

When Dr. Stram looked at the chart and saw the name, Tim Dolan, she couldn’t believe what was happening.

“To tell you the truth, I was really worried,” she says. “This is a long and complicated surgery with lots of steps. It’s a big team effort and everyone in the operating room is working hard to take care of the patient. As the surgeon, I need to stay hyper-vigilant and focused the entire time.”

For Dolan, the surgery was just the first hurdle, as he would spend another six days in the ICU and 10 total days in the hospital.  Apparently, he didn’t respond well to some of the narcotics he was prescribed and was delirious for much of the time. This caused him to pull at his tubes and generally be “a handful” for the staff.

“I pretty much had to have a full-time babysitter the entire time,” Dolan says. “The staff kept wondering why I was referring to Dr. Stram as Mandy and then she was able to relay the story and people were starting to put it all together.”

Dolan says that the cardiac problem was caused by stress and some high blood pressure, although medical staff did find by reviewing an earlier EKG that he had an existing aneurysm that was so tiny it didn’t previously need to be treated.

“I was just coming up on what would have been my busiest three weeks of the year and that probably had something to do with it,” Dolan says. “I was extremely fortunate for all the skill and care I received

from all of the medical professionals I came in contact with over this time.”

His days are now filled with things like cardiac rehab and listening to his new St. Jude aortic valve that ticks like a clock in his chest. He’s also tending to a more managable amount of work.

Of course, there are still the duties with being a commissioner, a position he chose to not seek for another term in this fall’s election.

“On the way home from the hospital, I had my dad stop and pick up the filing paperwork,” Dolan says.  “But it was a family decision and my son Gavin is 15... he really wanted some more fishing time with his dad.”

Dolan says he is thankful for all of the good fortune he has found, even in these difficult times. It’s the strength of his family that has been helping him get through this most difficult recovery.

“I’m humbled and incredibly grateful for my friends and family, especially my parents (Becker residents Mike and Julie Dolan) and kids, and all the ways they’ve stepped up to help me,” Dolan says.

And then there was the classmate, “Mandy,” who made sure that their next high school gathering of friends will hear perhaps the most amazing story in the history of class reunions.

“I’m just so happy Tim got to us in time and that we could get him through this,” Dr. Stram says. “He’s an amazing person and his strength is really what got him through surgery and recovery.”