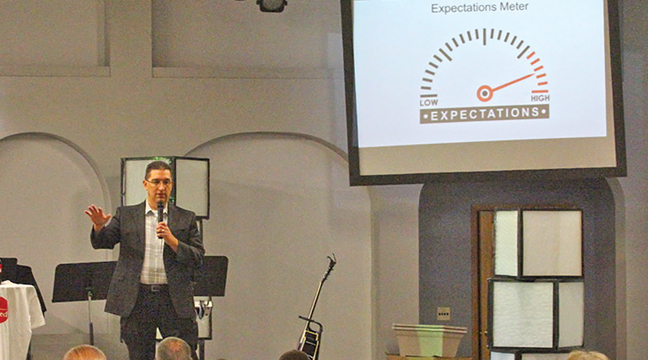 RICK WEIBLE gave a presentation on the 2020 election and the data problems he has analyzed and reported on to the State of Minnesota. (Patriot Photo by Bill Morgan)

Does Minnesota have election integrity?

Last Saturday, about a dozen or so concerned citizens from Central Minnesota joined a group of ladies who organized an informational analysis of the 2020 local election. The event was held at a local establishment in Becker.

The integrity of the 2020 election continues to make national headlines and spark debate in numerous states across America, and Minnesota is no exception.

Rick Weible, former Minnesota GOP operative and for St. Bonifacius mayor, was the featured speaker who taught the guests how to participate and prevent voter fraud from happening in future elections.

“I don’t have an official ‘title’ other than curious,” said Weible. “Curious in, ‘what happened in Minnesota?’”

Weible has his own consulting company right here in Minnesota in which he works on computers for small and mid-size companies.

“That has led me into basically two different areas in computer technologies but also analyzing databases and numbers and stuff like that.” he says. I also help people with accounting audits, forensic audits, hard drive recoveries, all that stuff.”

Weible says he looks at data and looks at different connections that help owners re-imagine their business.

Saturday’s event was entitled, “Question the Election Results?” and featured Weible describing the Minnesota election timeline issues, the problems with absentee voting, missing data and ballots and how “39% of Minnesota ballots were not connected to a registered voter as of Nov. 29, 2020, five days after the Minnesota canvassing board met and certified the election on Nov. 24.”

Weible’s slideshow went on to show some election races from House and Senate candidates and the slim margins of victories and the discrepancy in the missing data and statistics of voter history and participation.

Weible suggests the verification process for election day registration should be the same as registration before Election Day.

“Voters should not be allowed to vote until their eligibility has been determined,” he said.

When Weible looked at the Minnesota election database, he asked himself, “how can we as citizens throughout the U.S. certify an election on Nov. 24th and not have all the data in there according to data history?”

“Some is okay by state statute where they have a deadline of Dec. 15th,” he said “but when they are not even meeting that deadline, it should raise all sorts of questions.”

Weible asked the attendees Saturday, “as voters, are you okay with that? That you can’t, on the day of certification, validate almost 40% of the election?”

“When we have this huge trust of expectations that government is actually doing everything on the up and up and there’s oversight, when you look at just the basics, we see there is a disconnect,” he says. “And that’s an issue.”

Weible told the guests that Chippewa County finished their certification by Nov. 16th, so he said, “let’s have an honest discussion and figure out how we can get the rest of the counties to be like Chippewa County and finish the work earlier.”

Many people feel there’s hardly anything anyone can do  to make change in government and in elections and so they stay away from stepping up to initiate that change. Some people do step up and volunteer to be local election judges at their own precincts, but do people know one can be an election judge anywhere across the great State of Minnesota?  Even in Minneapolis and St. Paul! Or Duluth! Wouldn’t that help to ensure proper voting procedures, accurate counting and accessing ballots and voter integrity?

“As citizens of this great state, people should have a service heart and be able to step up to make sure that these counties have the representation from both parties to make sure we do have full accountability,” said Weible. “Full oversight. Because when we actually have that, the system works great.”

According to statistics, approximately 20,000 people who identified themselves as DFLers volunteered to be election judges around the state. Just a little over 3,000 of GOPers did the same.

Weible says when people don’t step up to do their part, one tends to see the types of results the state saw in 2020.

“Steve Simon (MN Secretary of State) claims I’m reckless  and he disagrees with my analysis, but I’m sorry, this is the data that you (Simon) provided. This is not anything I created,” said Weible.

“Minnesota should add a photo ID requirement to election law,” he added.

Following elections, every county in Minnesota audits its votes before certifying them to the state. Statute 206.89 also requires counties to perform post-election reviews of election results returned by the optical scan ballot counters. Each eligible election — U.S. president, U.S. Senate, U.S. House of Representatives and governor — is reviewed with a hand count of the ballots in precincts selected randomly by the canvassing board. Results are posted to the Secretary of State’s website.

Despite these checks, Republican legislators — and “computer geeks” like Weible, feel more is needed to protect against voter fraud.

Those in attendance at Saturday’s event included Rep. Shane Mekeland, Big Lake Mayor Paul Knier, Big Lake Council Member Paul Seefeld,  local citizen Wanda Woolhouse and a couple from Cambridge in Isanti County who stayed around to talk to Weible following the event about a Positive Psychology program called “The Orange Frog/Happiness Advantage Initiative,” which the county commissioners are attempting to pass.

Teri Dickinson and her Trifecta entourage of herself, Rachel Davis and Spencer Erdahl, organized and promoted the event. The group was formed in the kitchen of Dickinson’s home and has grown to nearly a dozen helpers (Deb, Linda, AJ, Sandy, Ruthi, Spencer, Chris, Rachel, Brenda, Lisa, Teri). They have at least three more similar events scheduled for the local area including one at the Monticello Community Center (505 Walnut St., Monticello) on Wed., Nov. 17 from 6-8 p.m.

“We have found monsters lurking, we have studied and analyzed these creatures who have manipulated the elections, manipulated the laws — how they say they really care but they don’t,” says Weible.

“I’m an optimist and I do think things can change for the better, We just have to show up.

“Minnesotans should ask for better.”