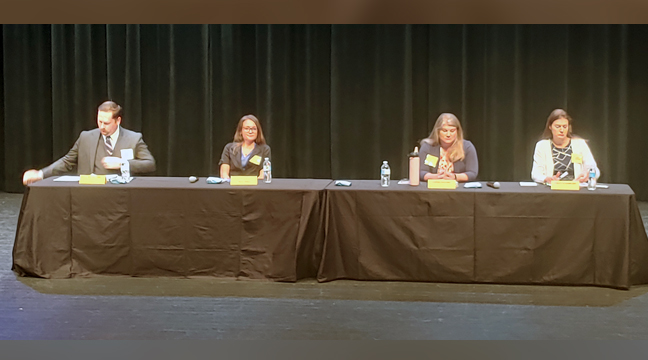 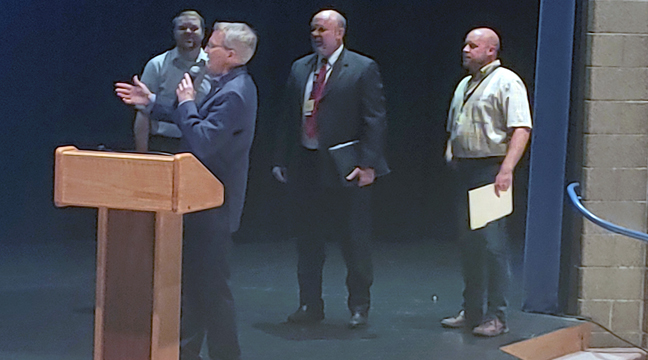 Previous Next
THE BIG LAKE SCHOOL BOARD CANDIDATES met for a Q&A last week. From left to right are Derek Nelson, Chelsea Hancock, Connie Stegora, and Ashley Schabilion. Not in attendance was Alison Krueger. (Photo by Katherine Cantin.)
BIG LAKE MAYOR PAUL KNIER intrduced staff from the Big Lake School District who explained the referendum and answered questions from the audience. Pictured behind the Mayor are TJ Zerwas, Tim Truebenbach, and Allen Berg. (Photo by Katherine Cantin.)

Last week Thursday, the Big Lake Chamber of Commerce hosted a presentation/discussion regarding Big Lake Schools’ upcoming election. The evening started with a presentation on the building bond referendum and how the funds would be spent, should the referendum pass, and was followed by a question and answer session with school board candidates. The presenters stated a video of the presentation would be available to view online at the Big Lake Chamber of Commerce website, though at the time of writing this article the video had not yet been uploaded. Early voting for the election is open now, and residents can request a ballot at Referendum.BigLakeSchools.org or can stop in to the district office during business hours to vote. An election will be held for all precincts at Big Lake City Hall Nov. 2.

Supt. Tim Truebenbach, Director of Community Education Allen Berg, Grounds Manager TJ Zerwas, and Director of Business Services Angie Manuel all helped to explain the various aspects of the referendum. Improvements to the school grounds including replacing old roofing, updating HVAC systems, and other maintenance projects would be performed.

Because some existing debt will be paid off this year, the $30 million referendum, if passed, would result in a $0 tax increase. Essentially, it’s similar to paying off a car loan, then going and purchasing a new car where the loan payments are the same as the loan that was just paid off (to re-phrase an example given by Manuel.) For this reason, the ballot does indicate that this vote will result in a tax increase, but in reality taxes would remain the same as the previous year.

One attendee at the event was curious about whether the $30 million figure would change at all, given the inflated costs of building materials. The presenters assured the audience $30 million is the most that would be sought from the taxpayers, and if this was insufficient to cover the costs of all the projects, one or two less urgent projects would be put off.

A tax calculator, a webinar answering residents’ questions, and more information on the specific projects the school hopes to tackle are available at Referendum.BigLakeSchools.org.

Four of the five candidates running for the open school board position attended the candidate forum during the later part of the evening. Alison Krueger, unfortunately, was unable to attend due to being involved in a traffic accident earlier in the day (fortunately, Krueger reported she was not seriously harmed in the accident.)

The other candidates include Derek Nelson, Chelsea Hancock, Connie Stegora, and Ashley Schabilion.

Each attending candidate gave an opening statement to explain his or her background and the reason for running.

All responses to questions reported in this article will be written in the order (left to right) that the candidates sat.

Nelson stated that he has been a business owner in Big Lake for six years. He is one of the coaches of the cheerleading team, a team which has recently been recognized on the national stage. Nelson claims he has seen first-hand the issues that students face on a regular basis, and wants to implement changes to better serve the students. He hopes to address issues of bullying and excessive amounts of homework, among other issues.

Hancock said that she grew up in Big Lake. After graduation, she obtained a marketing degree and taught for some time at the University of Minnesota. She and her husband (also a Big Lake alum) have three kids in the school district, and she wants to be involved in board decisions to ensure the best education for the students. She hopes to work with the board as a team in order to address gaps in service to the students, find new opportunities for both special education and gifted students, and increase community involvement.

Stegora said she also grew up in Big Lake. She went on to earn a master’s degree in business and is working as a realtor. She’s also worked as a Target manager and served as an elementary school PTO. She has four kids of her own in the school district, plus another student, who is a friend’s child, who is staying with the family for a time. She wishes to focus on building back after COVID-19, addressing students’ mental health, and expanding STEM programs.

Schabillion said she is the mom of four Big Lake kids, and has seen first hand areas for improvement. During a recent school board meeting, Schabilion spoke on transparency in the curriculum and about CRT. Her priorities would be to ensure transparency, protect parental rights, fix the overreach in the discipline policy, and keep out CRT.

The board members took several questions from the audience, but given the long discussion (questions and answers went on for nearly two hours) not all can be reproduced here. A full video of the event will be made available at BigLakeChamber.com.