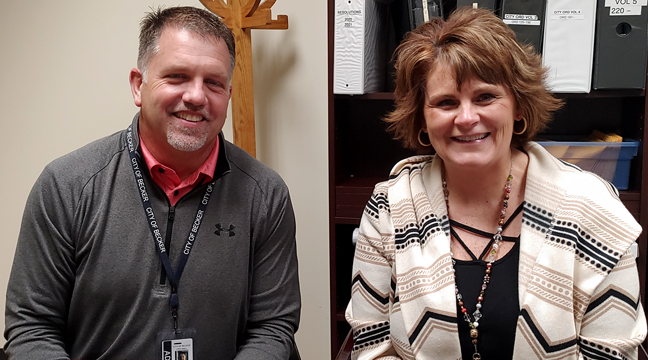 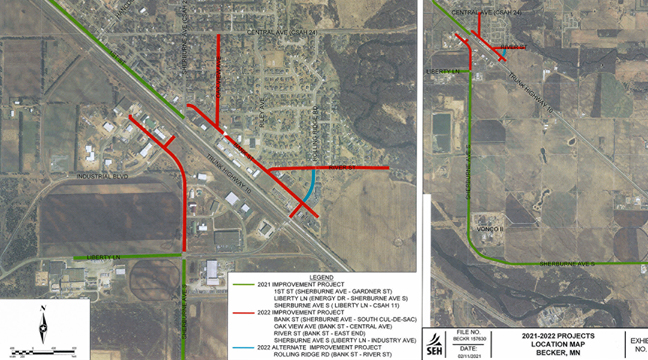 Previous Next
PHIL KNUTSON (L) AND CONNIE ROBINSON (R) have been working on a five-year street reconstruction plan along with city staff. (Photo by Katherine Cantin.)
A MAP OF BECKER STREETS depicting where construction will take place over the next five years. (Submitted photo.)

The City of Becker is planning to adopt a five-year street reconstruction plan. A public hearing for the plan will be held at the next city council meeting at 5 p.m. March 2.

Working on the Plan

Phil Knutson, Public Services Director for the city, says city staff has been working on this plan along with city council for several months now. The streets were reviewed along with the Capital Improvement Plan (CIP) and it was found that many streets were nearing the end of their lifespan. Last April, staff took the city council members on a tour of the streets, showing where some were quickly becoming worn. The five-year plan being proposed will take care of the roads that need attention in a timely manner.

The life expectancy of any paved road is about 20-30 years. The road can be preserved for a few more years so long as they are properly maintained through chip sealing and other maintenance measures. However, at some point after two or three decades it becomes more costly to continue to repair the road than it would be to completely reconstruct it.

“Sometimes business owners reach out to me and say the roads are bad around their business, and they want to know what they can tell their drivers,” said Knutson.

Now he can simply pull out the plan and tell them exactly when their street will be redone.

Connie Robinson, City Treasurer, says this is a great time for the city to start working on the plan. The city is about to pay off a big chunk of debt, and with interest rates low at the moment, now is a good time to pick up another bond to finance the reconstruction project.

“We’ll be able to keep the tax levy almost right where it’s at,” said Robinson. “We’re trying to make this transition as seamless as possible for the taxpayers.”

She went on to note that most taxpayers would barely notice the tax increase. The former debt levy, which the city will be paying off shortly, was $911,000. The new debt levy, to finance the project, will be $980,000.

Robinson and Knutson said the council has done really well with managing the city’s debt. There was a healthy amount of pushback from council to have staff work out the best possible plan. Staff is pursuing grants and looking for any way to stretch the taxpayer dollars however they can. The city and the township are pursuing one grant together for reconstructing 97th St., which runs along the Elk River just north of the city.

There have even been discussions about one day being able to maintain city infrastructure without using any debt at all. Unfortunately, with roads quickly nearing the end of their lives, this won’t be possible in the near future.

A public hearing will be held at the next city council meeting, 5 p.m. on March 2. Knutson and Robinson both encourage residents to attend the hearing if they can, or to reach out through a phone call or email if they cannot. Phil Knutson can be reached at pknutson@ci.becker.mn.us, and Robinson can be reached at crobinson@ci.becker.mn.us, and both can be contacted through the city hall phone number, 763-200-4239.