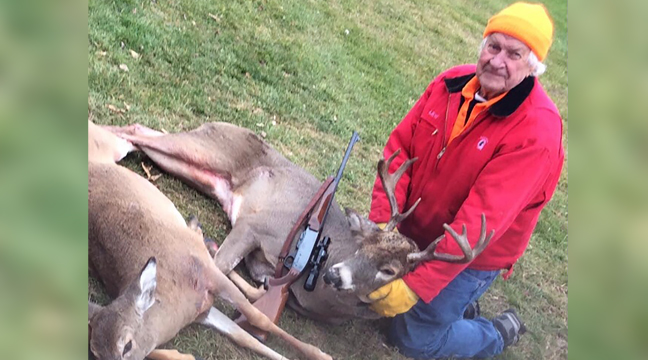 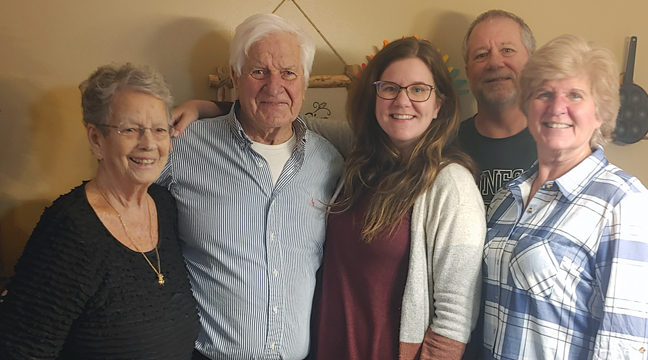 Becker resident Lewis Haberman celebrated an excellent hunting season on the back end of a crazy year. During the summer, Haberman suffered a pulmonary embolism, but survived, to the surprise of his doctors. After months of recovery, Haberman was excited to go on his annual hunting excursion, where he was able to bag the largest buck of his life.

Haberman grew up and raised his own family in Sherburne County. He came from a family with 13 siblings, and he in turn had eight kids of his own, of which two still live in the Becker area. One of his siblings is also still living in Becker. He and his daughter, Becky Withrow, joked that Haberman was (at least distantly) related to most of the Becker population.

Haberman left his parents’ home at the age of 13 to live with his sister in St. Cloud. Sadly, when Haberman was about 20 years old, in 1954, his mother and three of his siblings died in a tragic car accident.

Haberman spent many years in Sherburne County, and raised his family in Elk River. Eventually, he purchased a resort on Gull Lake in Brainerd, and he and his family moved up there.

For the last 22 years, Haberman and his partner, Barbara Bonin, have been living in Arizona, but they decided to move back to Becker, now living at Shepherd of Grace Senior Community, after Haberman’s medical crisis this summer in order to be close to family. Haberman says he misses the Arizona temperatures!

Haberman was on a trip to Montana to spend time with one of his sons when he fell ill and found he was having trouble breathing. He went to the hospital, where it was discovered that he was suffering from a pulmonary embolism, which is a blood clot in an artery of the lungs. His doctors did not expect Haberman to survive, but he did. After months of recovery, Haberman is doing much better, and no longer needs constant oxygen.

Lewis Haberman has not missed one hunting season since his first at the age of 12. That means he has been hunting for the last 75 years in a row, without missing even one year. Haberman takes joy in hunting, and teaching his children and grandchildren to hunt as well. Haberman’s recovery was fueled by the desire to go hunting this season, and he miraculously was able to do so,

Haberman shot one doe from his deer stand, and as his sons were grabbing the animal, Haberman spotted a buck and shot it down too, surprising his sons who were unsure what he was shooting at. It was a 12 point buck, which Haberman said was the largest of his hunting career.