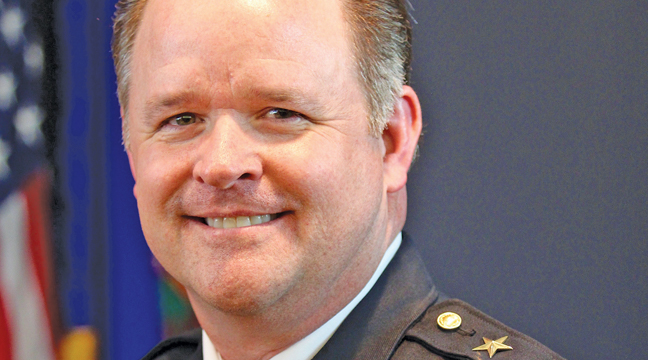 BECKER PD CHIEF BRENT BALOUN decided to stay in Becker after being offered a chief position in Brainerd, his hometown . (Patriot Archive Photo).

Becker Police Chief Brent Baloun was contacted in December about a job opening for the position of police chief in the city of Brainerd. Baloun, being a native from the area and having his parents and many friends residing there, was curious about the position and advised the “headhunter” of his interest.

“It was an opportunity that kinda fell in my lap,” Baloun said. “I wasn’t seeking new employment, but the position intrigued me. For me to be able to return where kind of I first started and grew up was exciting.”

Current Brainerd Police Chief Corky McQuiston is in line to retire soon and Deputy Chief Mike Bestul was not interested in applying for the job of chief. However, before Baloun made a decision, he had a talk with Becker CA Greg Pruszinske and Mayor Tracy Bertram who told him they understood why he would consider applying for a job in his own hometown.

With that, Baloun told the headhunter (David Drown Associates) he’d throw his hat in the ring and with the help of a Brainerd city hiring committee, they whittled the list of 25 applicants down to the top seven candidates.

Baloun was one of those top seven.

Those candidates interviewed virtually and were awarded “points” based on their resumes and community panel interviews. The city’s police and fire civil service commission then certified the top three candidates with the highest score, sending those names to the council for consideration.

Again, Baloun was in that top three group with Fargo Lt. George Vinson scoring the highest, followed by Baloun in second and Capt. Victor Siebeneck, of Salt Lake City, Utah, in third.

“I was kinda shocked I made the top three because when the Zoom meeting was over, I just had a feeling I hadn’t come across that well,” said Baloun.

Sure enough, a short while later, Baloun was told by the headhunter that the Brainerd Council decided to offer the job to Vinson in a 5-2 vote.

“I thought, okay that’s fine. I really wasn’t expecting to get it,” said Baloun.

Baloun then posted a Facebook message with his wife, Julie, proclaiming he came in second and it was all behind him.

Late December/early January, Vinson contacted the City of Brainerd and declined the job citing wage concerns. It was noted he explained to the Brainerd Council he was “shocked and surprised” he was even offered the job in the first place.

With that, Gary Weiers, of David Drown Associates contacted Baloun Jan. 4 and asked if he was still interested in the position. Baloun said yes, but had a wage demand himself to be hired at the outgoing chief’s salary.

The city policy states new employees must be hired in at steps 1-4, with steps 5-9 being merit-based. The city was hoping to hire the new chief at Step 4 but Baloun was looking for somewhere around Step 6.

That drew concern from a few council members but Council President Kelly Bevans reminded them McQuiston was originally hired on as chief at the same salary as the outgoing chief at the time, so there is a city precedent for the practice.

“I didn’t take it as being an outrageous demand being that I have over 14 years experience as a police chief and a master’s degree to go along with it,” said Baloun.

Council member Kevin Stunek made a motion Jan. 4 to hire Baloun at step 6, and council member Tad Erickson seconded it. The motion passed 6-1, with Johnson opposed. Baloun got wind of some of the concerns the council had with his salary demand and experience and took those concerns to heart, so he went home, talked things over with his wife and made a decision to turn down the job.

“Julie was never really thrilled with leaving the Becker community and I wasn’t either,” said Baloun. “I already had a solid relationship with Becker’s staff council and Mayor Bertram and starting over with possible contention at this point in my career was not too appealing.”

So, Baloun decided after a week to advise Brainerd of his decision to say “no.” Baloun sent them a letter with his explanation and wished them “nothing but continued success” in their search for a police chief and thanking the council for the opportunity.

“I’m not that far off from retirement and my family and I still love it here in Becker,” he said. “The only reason it drew me in was because it was where I have a lot of friends and family there and a place I’m familiar with. But we love it here in Becker and don’t plan on going anywhere else.”