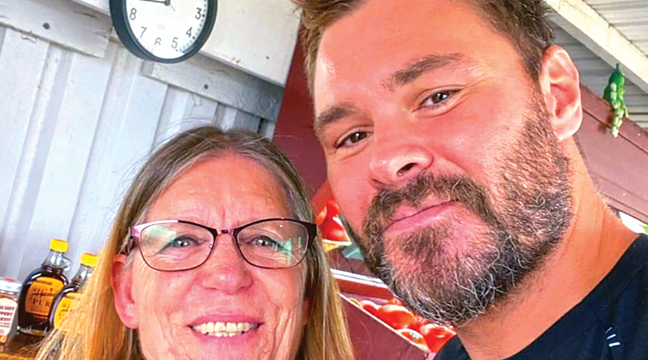 CHICAGO P.D. ACTOR, Patrick Flueger of Red Wing, posed for a photograph with Norm’s Farm Market employee, Susan Johnson after stopping at the farm on his way home from vacation in Northern Minnesota. (Submitted Photo).

Patrick Flueger from the TV show, Chicago P.D., and his family made a pit stop at Norm’s Farm Market in Becker on his way to his home town of Red Wing over the 4th of July weekend. The Fleugers were reported to have spent some vacation time in Northern Minnesota before heading through Becker on their way home.

Sue Johnson of Norm’s took the opportunity to pose for a photo and post the visit on social media.

Flueger plays Adam Ruzek on the Chicago P.D. show and has also made appearances on Chicago Fire, Chicago Med and Criminal Minds TV shows. He has been in show business since 2001 when he got one of his first big shot playing student Jeremiah Hart in the Anne Hathaway movie, The Princess Diaries.

Currently, he has a lead role as Shawn Farrell in the television series The 4400.

Patrick John Flueger was born on December 10, 1983 in Red Wing, MN. He is an accomplished musician writing music and playing guitar and was the lead singer for the band Sleeper 7.