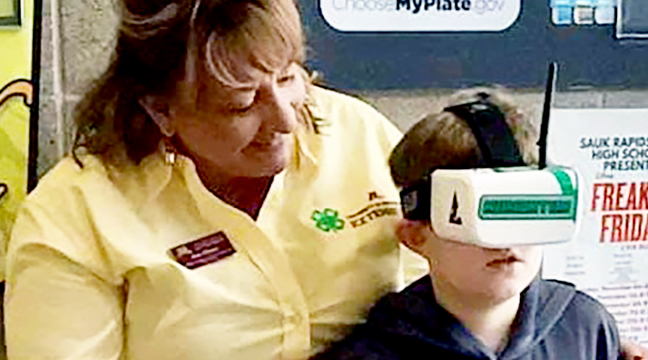 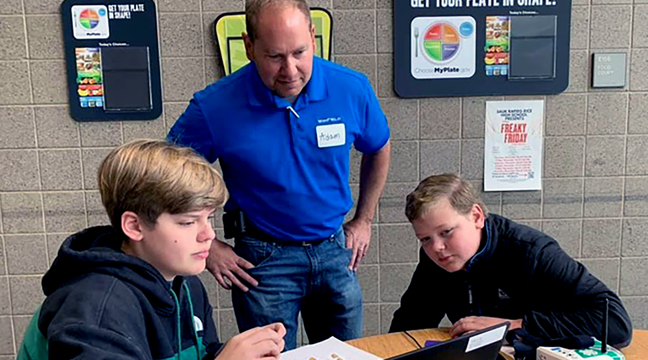 4-H’ers use drones to learn about invasive species

The 4-H participants walked Ann back to the simulators and told her she needed to master the simulator before she could try to fly the drone again.

“You can’t just fly without practicing,” 4-H’er Evan Lamberg (AKA Shooter)  eighth grader from Saint Cloud reminded. “You have to master flying while using the simulator, so you do not damage the drone.”

During the day, the youths had a chance to do an Agriculture Drone Challenge. Helping to lead this station was crop advisor Adam Johnson also known as Hammer Storm (his call sign) also from Centra Sota Cooperative.

“I guess we should have called Centra Sota to come and spray the field,” said 4-H’er Drew Arnold (AKA Red Bull), fourth grader from Foley as he realized, when flying the drone, that the invasive species had spread from early in the season to middle season because they did not treat it.

“Now we will have no yield”, said 4-H’er Jonathon Mersinger (AKA Bookman), ninth grader from Saint Cloud. “We put all that work into the crops and now we have zero produce and no income.”

All the participants decided next time they would ask faster.

One of the favorite activities of the day was the opportunity to do some soldering. Chisago County volunteer George Sawyer led the youths all day in one-on-one experiences to soldering and showed them different techniques. Each youth had an opportunity to solder the wires from lights to a circuit board, to connect and light up a shadow frame with their photo inside it from Drone camp.

“I just happen to have all of my soldering supplies in my truck” said Benton County 4-H Adult Volunteer Hans Mersinger as he walked in from outside with his arms full of supplies.

Hans also worked with youths one on one so that more youths could participate.

The day was a success considering the excitement of the youths that attended. All of the youths decided they definitely wanted to be sure we have another drone camp real soon.