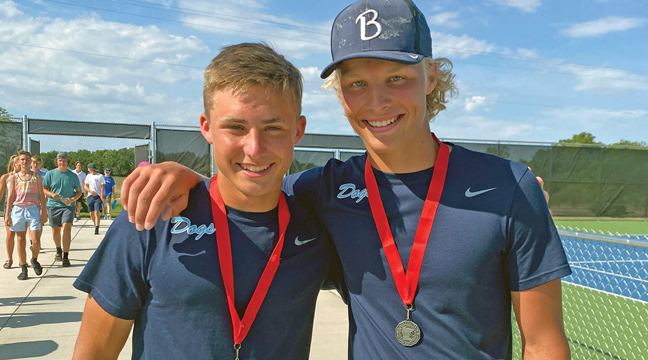 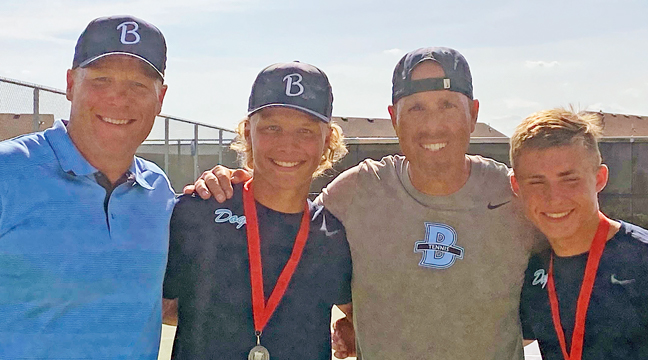 Previous Next
Ryan Bengtson and Eli Scheideman qualified for the State Class AA Tennis Championships after finishing second in the Section 8AA tournament. (Submitted Photo).
Coaches (and dads) Brent Scheideman (L) and Hokan Bengtson celebrated their player’s (and son’s) Eli (L) and Ryan as they qualified for the state tennis tournament. (Submitted Photo).

The Becker Bulldog tennis team saw its season come to an end last Wednesday in a closely fought affair against the Bemidji Lumberjacks, 4-3.  It turned out to be the semifinal match that determined who qualified for the state tournament, as Bemidji went on to roll over Alexandria for the tournament berth in the section finals.

“We played really well at many spots today, but had trouble finishing points especially in doubles,” Coach Hokan Bengtson said.  “Bemidji is a well coached team that really played great today — credit to them and their coach for playing a great match.”

Becker picked up all three of its wins in the singles matches, as Ryan Bengtson played in the #2 spot and went 1-1 in the first two sets before winning on an injury default.

In the #3 spot, Luke Bordson was efficient in defeating his opponent 6-3, 6-1, while seventh grader Troy Nuest continued his phenominal season with a convincing 6-2, 6-1 win in the #4 spot.

Despite the disappointment of not making it to state, Bengtson was proud of his team and the incredible season they enjoyed.

Thursday, the Bulldogs brought several individuals and teams to the individual section tournament and came away with a state entrant as the team of Ryan Bengtson and Eli Scheideman finished in second place for a spot in the State Class AA Tennis Tournament.  Matches were scheduled to start Thursday in Prior Lake.

“Ryan and Eli played some gritty tennis winning some great points to advance to the state tournament,” Bengtson said.  “They ended up being runners up - losing to the team from Alexandria in the finals.”

Because the Sophomore sensations had already defeated the third place team, there was no need for a true second match.

In round one, the duo dispatched their Alexandria opponents in a 6-4, 6-2 match which set up a second round slug fest with a Bemidji team.  The semifinal match saw Becker fall behind after a 6-7 opening set, but they battled back to win 7-5, 7-6 to get to the finals, where they fell by a pair of 3-6 sets.

Becker’s singles participants, Zach Bengtson and Troy Nuest, each also played good tennis on the day.  Nuest had a quick exit, losing his first match 1-6, 0-6 to a senior from Bemidji, but held his own as just a seventh grader.

“Troy had a a great season finishing 20-7 on the year as a seventh grader,” Bengtson said.

Zach Bengtson just missed an opportunity at going to state, as he defeated his Moorhead opponent 6-2, 6-0 to open the day. In the semifinals, he defeated Emilio Estevez from St. Cloud Tech 7-5, 6-2.  That put him into the finals, where he dropped the match in a pair of 3-6 sets.  From there, he faced Brainerd’s Patrick Moraghan in the true second match and dropped an incredibly close contest.

Overall, Zach finished the season with a great 19-12 record playing in the #1 spot, meaning he routinely faced the best player from the opposing team.

Overall, Bengtson was pleased with his team’s play in Sections and was looking forward to watching the doubles team at state.

“We had an amazing showing at the Section 8AA tennis tournament,” Bengtson said.

Look for complete details of the Scheideman/Bengtson state tournament experience in next week’s Patriot. 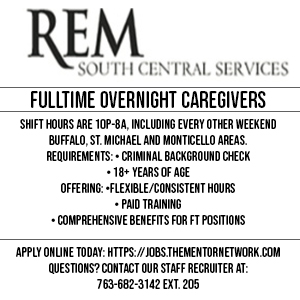