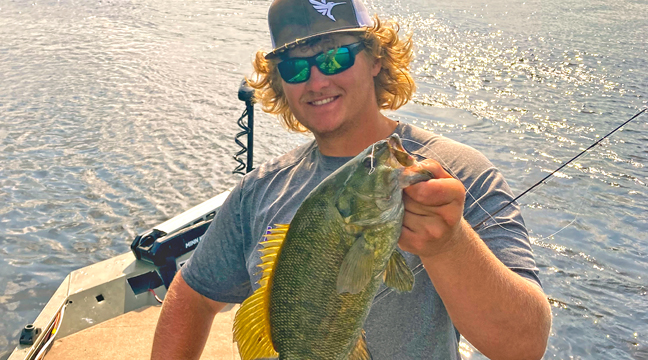 “Biggtime” Charlie Wright likes to spend his time on the water, including the Mississippi River. He is pictured here with a nice Smallmouth Bass he caught Tuesday afternoon near Clearwater. (Photo by Mark Kolbinger.)

Master of the Mississippi

The Mississippi River creates the border between Sherburne and Wright Counties, but many local anglers have yet to cash in on the potential of this world class, diverse fishery.

But one local young man not only knows the potential of this fishery, but he has mastered the flowing waters of the mighty Mississippi.

The 2020 Becker High School graduate spends a good deal of his summer on the river, guiding fishing and sight-seeing trips on a stretch of the river from St. Cloud to Elk River.  He has a knack for coaxing the wily Smallmouth Bass into the boat.

Charlie says the fishery is incredibly diverse, with great Smallmouth Bass action, but also the chance to catch an occasional Largemouth, as well as Channel Cats, Walleye and Pike.  While there are also Muskies in the river, he says they aren’t as prevalent in the section of fish he guides on from Clearwater to Snuffy’s Landing in Becker.

Fishing isn’t just a hobby for Charlie, but it is an integral part of his life – from his current college fishing team to his career goals that include being a professional fisherman.

“I’m currently majoring in Marketing and hopefully when I’m done with college I will get a job that includes fishing of some sort,” Charlie says.

Wright will soon be leaving for his Sophomore year at the University of Montevallo in Alabama, where he is a member of the two-time defending National Championship Falcon Fishing Team.

Last fall, Wright fished in six collegiate bass tournaments all across the United States, including stops in Illinois, Arkansas, Wisconsin and Missouri.  He and his partner, fellow Minnesotan Blair Erickson, won their first tournament on Madison Lake in Wisconsin.

Charlie’s days as a guide date back many years, as Dusty would take him to Christian-based summer camps where they would take the campers and staff out fishing. In addition, they would serve others by guiding trips for the MN Adult and Teen Challenge, a program for those recovering from drug or alcohol addiction. By the time he was 16 years old, Charlie was guiding groups on his own.

Wright says his high school fishing career set him up well for his college success, as he was part of the highly successful Becker BASS team, which was started by his dad, Dusty, in 2017. Dusty remains the head coach of the team, which has grown to one of the largest in the state.

As a result of their love of being on the water, Charlie and his dad have even teamed up to launch their own fishing-based business, Biggtime Outdoors.

It has created the perfect synergy between being able to fish and also to start the branding of his outdoors identity, “Biggtime Charlie.”

When asked about his advice for people who would like to get started exploring the great fishery on the Mississippi, Charlie says it doesn’t take a lot of equipment or expertise.

“There’s a lot of rocks in some areas of the river so I obviously wouldn’t recommend bringing a big boat out there,” Charlie says. “People can really catch a lot of fish from shore – just use a hook, sinker and a night crawler.”

Or better yet, check out “Biggtime” Charlie’s website at BiggTimeOutdoors.com and take a guided trip with the Master of the mighty Mississipi.