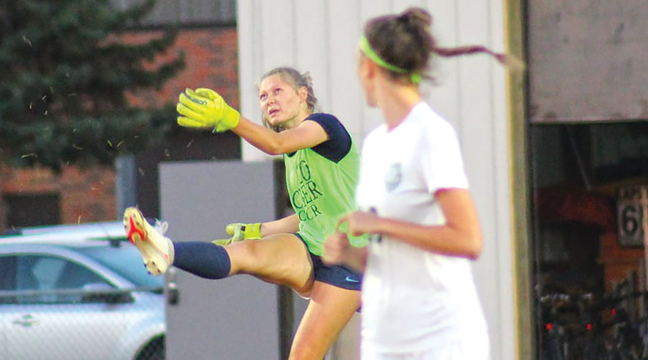 The Becker Bulldog girls soccer team went 0-2-1 in the last couple weeks to fall to 0-7.

Senior Captain Kennedy Rusin scored with 12 minutes left in game on a free kick in Becker’s Sept. 23 match against C-I to tie the game. It stayed that way after two overtimes in which neither team scored.

“We moved the ball well, and completely controlled the later part of the game,” said Becker Head Coach Ben Strom. “Kennedy scored a free kick from 35 yards out and nearly scored another a few minutes before that.”

Strom said his team definitely had the better of C-I later in the game.

“Liz (Mackendanz) had some key saves, including a diving save on a breakaway,” Strom said. “One of the most amazing saves I have ever seen! The girls are playing so much better!”

The Lady Bulldogs found themselves down 0-1 two minutes into the Sept. 27 game against Monticello and lost the match 7-0.

Sarena St. Denis, a strong defensive force for the Bulldogs since her freshman year, tried battling through an injury from the previous week. With less than a minute off the clock, the senior captain could not continue in the match and is likely out for the season.

Becker struggled to score again and lost to CL, 5-0.

They found themselves down 4-0  five minutes into second half, and the fifth goal for Chisago Lakes came at the 22:45 mark.

Becker had just five shots on goal. Mackendanz made 22 saves.

“We are down six starters,” said Strom. “That is a lot to recover from. The new starters and new players pulled up to varsity are learning to play with each other. There were parts of tonight that looked good — where we worked well, and showed improvement–against two of the better teams (Monticello and Chisago Lakes) in our conference.”

The Bulldogs traveled to Princeton Thursday then play at Rockford Monday, at Willmar Tuesday and at home Thursday against St. Cloud Apollo.