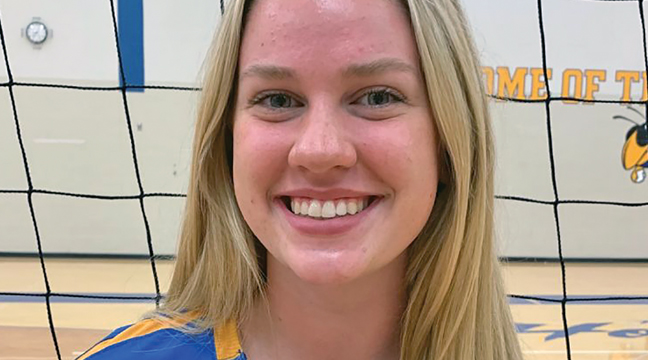 JUNIOR OLIVIA STOCKHAM spiked the ball in last week’s game against Becker at home. The Hornets lost to the Bulldogs 3-1 Nov. 12. (Submitted Photo).

Editor’s Note: In last week’s coverage of the Big Lake girls volleyball matches, information for the final match against Buffalo was used from the StarTribune’s Hub page, which was incorrect. The page has since been corrected along with  the following story.

In a back-to-back battle, the match came down to the final few points and the Hornets trampled the home team’s hopes with a 15-12 victory and a three-games-to-two win.

The Hornets were scheduled to play Monticello last Monday and Chisago Lakes and Sartell-St. Stephen last Tuesday, but the matches and the rest of the season is on “pause” due to COVID-19 restrictions.

Big Lake’s Olivia Stockham led the team with 104 kills followed by Miranda Segner with 42 and Mia Huberty with 37.

Segner was the team’s best server, as she tallied 14 serving aces in 28 sets played. Stockham was second with 12 aces in 32 sets played and Emma Rezac, Carter Monson and Madie Clausing each had 10 aces.

Huberty led the team in blocks with 13 while Clausing had five and Natalie Johnson four.