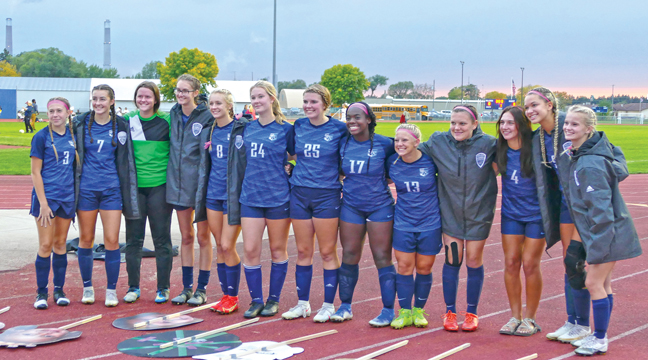 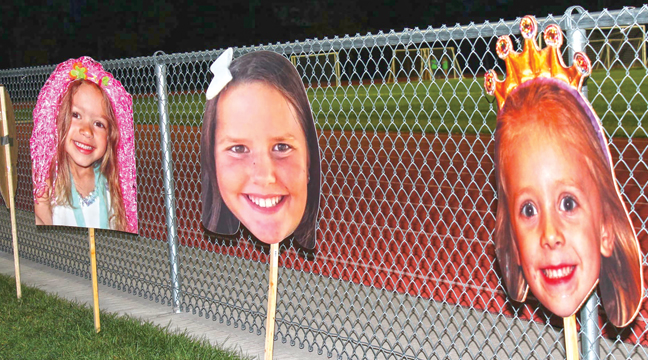 Becker’s 13 senior girls soccer players were given a tribute last Thursday prior to their match against St. Cloud Apollo at home.

The emotional tribute carried over to the game as the Bulldogs completely outplayed the Eagles throughout the match.

The underclassman presented large-head versions of  the senior’s childhood photos.Each senior received playing time along with being introduced in the starting line up regardless of JV or Varsity status, and all 13 were honored again at halftime.

A special moment ocurred as injured senior captain Sarena St. Denis started the game and received an ovation for her years of strong play. Soon after  the game commenced, she was subbed out.

In the first half, Becker saw themselves up 1-0 with 31:26 left when junior Hailey Szabla was in the right spot to tap in a corner kick from senior Cassidy Pauman. Becker made it 2-0 with 23:37 left as senior Alayna Moeller passed to senior Riley Norberg, who caromed the ball off a defender and in the net.

At 16:56, Szabla headed in a corner kick by senior Kennedy Rusin to make it 3-0 and seven minutes later, Szabla completed her hat trick by redirecting a ball into the goal from senior. Adeline Kent to make it 4-0 at halftime.

Apollo scored at 27:55 left in the game to spoil the shutout and they nearly scored again in the closing minutes, but senior goalkeeper Amanda Miner made a diving save on a penalty kick to secure the win.

Becker senior Taylor May (starter) had six saves while junior goalkeeper Liz Mackendanz had four. Miner (who played the second half)  had 12 saves. Apollo’s goalkeeper had nine saves.

“We started all seniors and they played with such speed and intensity,” said Head Coach Ben Strom. “Great way to end the regular season! Amanda’s last minute diving save of a PK was amazing!”

“This year’s senior night was one of my favorite soccer nights,” said Miner. “It started with amazing senior speeches, gifts, and pictures. Then it went on to a good game that we were all hyped for. It then came to a very exciting end when I saved a PK with about a minute left.”

“I was very nervous but also very excited and I had so much adrenaline,” Miner continued. “I could not have done it without the whole team cheering me on and everyone working so hard the whole game!”