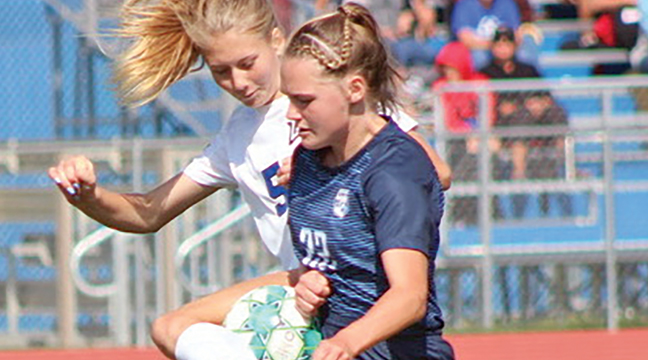 The Becker girls soccer team went 1-4-1 since the middle of September.

Becker faced off against Watertown-Mayer Sept. 18 and lost by a 4-1 score..

In the first half, the Bulldogs fell behind 1-0 at 24:50 on a penalty kick then found themselves behind by two at 11:06 on a header. Minutes later, they fell to 3-0 at 9:56 and at halftime. Much of the half was spent on the Becker half of the pitch.

In the second half just four minutes in, Watertown-Mayer scored again to make it 4-0.Two minutes later, Becker finally scored when senior Alayna Moeller crossed the ball from the right corner. The WM goalkeeper tried to punch it out to clear it, but it was mishandled by a defender, and then swatted in by the left foot of senior Riley Norberg.

That was all the Bulldogs could muster as they lost by three, 4-1.

Shots on goal had Becker with 10 and Watertown-Mayer with 26. Becker junior goalkeeper Liz Mackendanz had 22 saves while Watertown-Mayer’s goalie had nine.

“The girls played fantastic,” said Becker Head Coach Ben Strom. “We had a very good showing against one of the best teams in the state. The score line does not reflect the intensity and intelligence the girls played with. They pulled together and played well through lots of injuries and missing players. I couldn’t be prouder of how they played!”

“This was a very necessary game,” said senior. Sarena St. Denis. “We were able to experiment against a really good team. Even though we lost, I’m proud of how we played and didn’t stop playing our game the whole 80 minutes.”

It was 59° and breezy at start of the game Sept. 20 at home against North Branch.

The Vikings were ranked #1 and undefeated in the conference at the time and they easily took care of the Lady Bulldogs on parents night, 10-0.

Mackendanz had 10 saves while May had four.

“We had too many mental lapses,” said Strom.

The girls got to dust off their road uniforms after two weeks of home matches with a non-conference game against Zimmerman, Sept. 21.

The Bulldogs lost senior captain and defensive bulwark Sarena St. Denis 10 minutes into the game due to injury. In a hard fought match, the Bulldogs lost, 3-1.

Becker fell down 1-0 at 19:12 left in first half and that was the score by halftime.

Two-minutes into second half, Norberg crashed the goal and knocked down a clearing kick from Zimmerman’s goalkeeper, directing the ball just inside the left post to tie things at 1-1.

“Sarena, our defensive leader, going down early really hurt us, but senior Adeline Kent really stepped up and played great–running the defense perfectly,” said Coach Strom. “Liz played great as well–disrupting chances before they became dangerous and making good decisions all night! Junior. Rachel Fuller did a fantastic job controlling and settling the middle. Riley had a fantastic game. She spread the field and never stopped working! I’m am very proud of the effort today!”

In Becker’s first Mississippi 8 Conference regular season victory in school history since rejoining the conference, the Bulldogs knocked off the Princeton Tigers Sept. 30 on the road, 6-0.

Junior Hailey Szabla (returning from injury) scored up over the arms of the Princeton goalkeeper to put Becker up seven minutes in with an assist to senior Cassidy Pauman. Becker made it 2-0, when Norberg slipped the ball past the charging Tiger goalkeeper, with 8:56 left in first half. Norberg’s goal was assisted by Szabla.

Seven minutes into the second half, Norberg made it 3-0, off of a deft short touch-pass on the doorstep by Szabla. They didn’t stop there. Senior captain Kennedy Rusin made it 4-0 with a strong left-footed strike over the keeper with 22 minutes left, assisted by Szabla. Cassidy Pauman scored on a corner kick, slipping the ball between the pipe and the keeper with 14 minutes left for her first varsity goal. Freshman Abby Atwood, got  her first varsity goal to finish the scoring at 6-0, assisted by sophomore Rebecca Lyon.

It was reported that in the second half, the frustrated Princeton coach barked instructions to the JV players watching from the stands to come down and get suited up. He wasn’t joking.

Junior Ava Ewald had 14 clearances as the Bulldogs heavily outshot the Tigers.

Rachel Fuller tallied a 68% passing completion and Kent was credited with nine tackles.

“Having many players back in the lineup helped,” said Strom. “We were able to utilize a more attacking formation because we had those players back. Everyone played with intensity and intelligence. They did an amazing job in every aspect of the game!”

“Getting a goal off of a corner is something that I would’ve never imagined myself doing,” said Pauman. “Pulling that off tonight feels really good, especially when it’s my first varsity goal. All around the team played great together and our communication made us win that game.”

“I feel like the team played really good against Princeton, we made some great passes and played with high intensity,” said Atwood. “Our team has worked hard at practices and games, so it was a great feeling that all of our hard work paid off!”

It took overtime to decide the Oct. 4 match against Rockford in which each team went home with no win, no loss, but a draw.

Becker found themselves down 1-0 five minutes into second half, and 2-0 five minutes after that. However, they answered 25 seconds later when Norberg received a pretty pass from the corner by Pauman and one-timed it passed the goalkeeper to make it 2-1 with 29:54 left in second half.

The Bulldogs tied it up at 15:41 when Norberg took the ball off the foot of the crashing goalkeeper and snuck in a shot between a defender’s legs to make it 2-2.

The Bulldogs took the lead with 6:55 left when Moeller dropped a pass in from the corner that was headed on frame by Lyon. The goalkeeper couldn’t control her diving one-handed block and Atwood bulldozed the bouncing ball into the goal to go up 3-2.

Unfortunately, Rockford responded 15 seconds later to make it 3-3, where the match ended and the first OT session commenced.

It remained 3-3 after the first OT and then the Bulldogs took the lead with 2:23 left in the second session, when Rusin placed a 33 yard free kick from midfield onto the foot of Norberg, who split two defenders and completed her hat trick with a left-footed shot.

The lead didn’t last long again as the Rockets would score again with 0:57 seconds left and the game ended in a 4-4 draw.

“I was proud that we came back from being down 2-0 and scored three unanswered goals,” said Strom. “That shows amazing determination and I was so happy with their performance.”

It was a pleasant, sunny evening, Oct. 5 for an early 5 p.m. start against Willmar.

The Bulldogs battled hard but lost 6-2.

A corner kick goal at 15 minutes into the game by Willmar got the game’s scoring going. One minute later, Willmar scored again and goalkeeper Mackendanz was injured on the play and was replaced with senior Amanda Miner.

Mackendanz was able to return after six minutes had passed.

Willmar scored their third goal off of a penalty kick at 7:27 left in first half. One minute into second half, they scored again to make it 4-0 and five minutes later they made it 5-0.

Becker scored a couple minutes later on a free kick by Rusin, out of reach of the keeper and under the crossbar to make it 5-1. Willmar scored their final goal with 10 minutes left in the half and Becker notched their final goal a minute later on a penalty kick by Norberg, tucking a low ball just inside the left post. Mackendanz finished with 16 saves.

“This was a classic emotional let down game,” said Coach Strom. “We had an emotional and exciting game the night before, and we couldn’t get our heads right the whole game.”