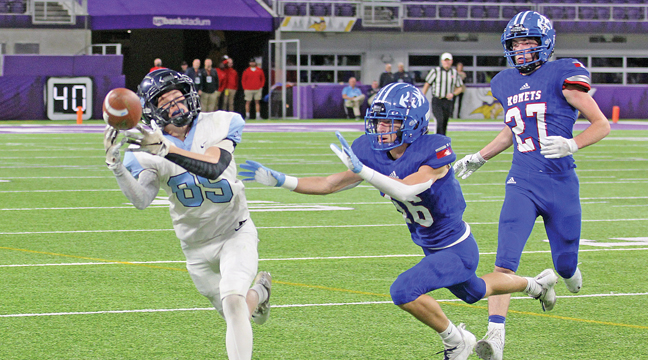 NICK BERGLUND pulled in this 20 yard pass from Ryan Bengtson for Becker’s second score of the night last Wednesday against Willmar. (Photo by Sara Waytashek).

The Becker Bulldog football team slammed the door on their perfect regular season with a convincing, 17-0 drubbing of the Willmar Cardinals last Wednesday night on the road. It was the defense that stood tall once again, shutting out their third opponent and sending the Bulldogs into the Section 8AAAA playoffs as the top seed.

The Bulldogs will take on St. Cloud Apollo on Saturday after the Eagles beat Little Falls earlier this week. Becker played and beat Apollo on Oct. 15, 23-18 in Becker’s hardest fought game of the year.

Last Wednesday. Carter Callahan got the Bulldogs on the scoresheet first when he punctured the goal line from two yards out to have the visitors go up 7-0.

In the second quarter, QB Ryan Bengtson found WR Nick Berglund from 20 yards out to extend the lead to 14-0. The rest of the game was almost all defense until Zach Bengtson again showed off his strong leg by converting a 32-yard field goal to cap the scoring in the fourth.

The Bulldogs finished the game with 264 total yards compared to Willmar’s 174. Willmar ran more plays (60 to 48) and had more yards on the ground (140 to 60) but Ryan Bengtson was strong in his leadership as he completed seven of his 15 passes for 204 yards and the one TD to Berglund.

Callahan finished with 89 yards rushing on 18 carries, but because the Bulldogs had four runners who lost yardage, the total came in at 60 for the team.

Landen Goebel had two tackles and one interception.

So the Bulldogs move on to play Apollo Saturday at home at 1 p.m. Should they win, they will play the winner of the Rocori/Detroit Lakes game of that same day. The championship game would be played at Monticello Nov. 5.