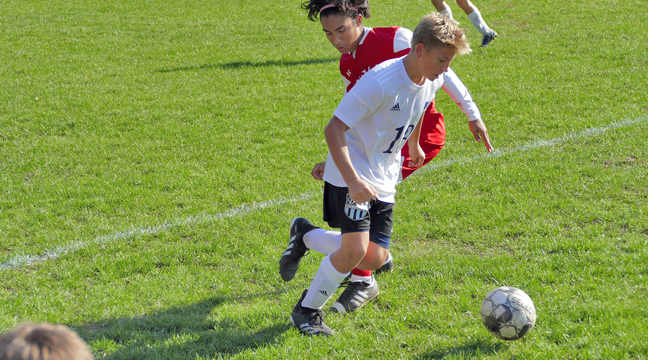 Evan Norberg worked his way past the competition in a recent game for the Becker Bulldog boys soccer team. (Submitted photo.)

The Becker Bulldogs boys soccer team started slowly this season but came roaring back with some improved offensive and defensive play to be a formidable foe in the M8 Conference.

Over the past two weeks, the team faced several M8 rivals and came away with several impressive wins, ending up in 3rd place overall.

On Sept. 20, the team went to North Branch and dropped a 3-1 contest to the Vikings.

The Bulldogs took the lead at about 20 minutes into the game as Junior captain Micah Boyer took the corner kick for the Bulldogs. From there, freshman Evan Norberg crashed the back post to hit the ball into the path of junior captain Owen Kolbinger who side footed it into the back of the net for the first goal of his varsity career.

“It was wonderful to see something from the training ground work out for us on the pitch,” said coach Nick Crowley. “Both Evan and Owen were in the right place and we scored.”

Unfortunately, the lead was short lived as five minutes later a controversial penalty was awarded to North Branch. The Vikings failed to convert the initial penalty, but were awarded a re-do when a Bulldog defender was cited for encroaching on the penalty kick. The Vikings converted their second attempt and tied it up at 1-1. With five minutes left in the half, North Branch scored the decisive goal to take the lead at 2-1 with a 35 yard shot sailing just over the fingertips of junior Becker goalkeeper Nick Gruber.

North Branch added a third goal late in the second half to secure the win at 3-1.

“We just didn’t play our game. It was raining, we were on turf, the ball moved extremely fast, but both teams played in the same conditions,” said Crowley. “We just weren’t good enough on the night to get the result we wanted. Even if you take the penalty away, we didn’t do enough to win.”

Sept. 23 was Parents’ Night and the Bulldogs hosted conference opponent Cambridge-Isanti, coming away with a decisive 7-2 win over the Bluejackets.

Goalkeeper Nick Gruber kept the Bulldogs in it early, as the Bluejackets came out with some offensive firepower.

Becker responded, however, and Chris Stich opened the scoring for the Bulldogs for his first goal of the year with Micah Boyer and Kevin Vogl assisting.  Ander Alzaga scored next on an assist from Kyle Vogl and Becker was ahead 2-0.

From there, Becker rolled with Boyer and Alzaga each picking up hat-tricks in the game, while Kevin Vogl and Brekken Klug had multiple assists.

“It was a very solid conference result and I’m happy Chris got on the scoresheet and I’m pretty happy with how we moved the ball – we created plenty of scoring chances and capitalized on most of them,” said Crowley. “We put on a great performance for our parents.”

On Sept. 28, the Bulldogs traveled to the campus of St. John’s and took on the St. John’s Prep Johnnies, coming away with a 5-5 tie.

The Bulldogs got off to an early start, when freshmen Rowen Klug took the corner and found freshman Evan Norberg on the far side who tapped it in for his first varsity goal of his career. The Bulldogs scored again when Alzaga, who was brought down in the box, cooly converted his penalty. Becker would lead 2-1 at half.

Becker went ahead in the 3-2 in the second half on a Boyer goal, assisted by Kyle Vogl, while Alzaga also scored for a 4-3 lead for the Bulldogs. Becker scored a late goal on a header from Boyer to tie it up 5-5.

Last Thursday, the Bulldogs took on Princeton and lost by a score of 4-0 to the Conference leading Tigers (8-3-2 overall).

“Other than turning it off in the last five minutes of the first half (when the Tigers scored twice), we played great,” said Crowley. “One of the best halves all season. We possessed and passed the ball up the pitch, we defended well, and we got a couple of great chances against a tough opponent.”

The second half was much the same, with the rain starting to pour, both the pitch and the play became a bit sloppier and the Tigers netted two more goals for the win.

Last Saturday, Becker hosted the Rocori Spartans and came away with a 3-2 win in a Senior Day matchup that honored senior players Beau Biegler and Jakob Johnson.

Alzaga netted a pair of goals and Boyer added his own to help the Bulldogs to the win.

“Again, we played well, passed well, capitalized on opportunities, and for the most part defended really well,” said Crowley. “At the end of the day, we got the win, and we got the win for Beau and Jakob.”

Monday, Becker edged their rivals, the Big Lake Hornets, 2-1 in a game that cemented a third place M8 Conference finish for the Bulldogs, who finished with a 4-3 M8 record, 7-6-1 overall.

Owen Kolbinger opened the scoring for Becker on an assist from Klug and Becker took the 1-0 halftime lead.

Early in the second half, Boyer received a deflected pass and found the upper right corner to increase the lead 2-0.p Gruber came up with some great saves to keep the Hornets back and helped cement the victory for the Bulldogs.