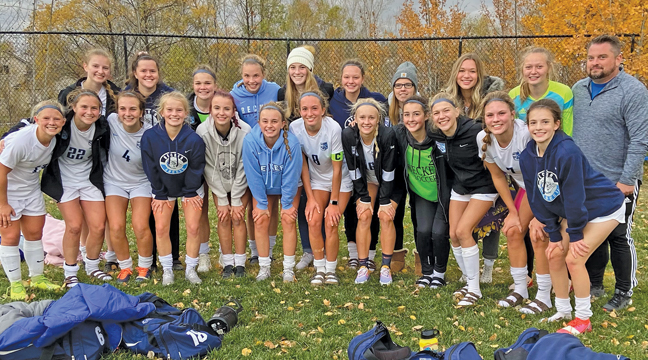 This year’s Becker girls soccer team fought back from multiple injuries that sidelined some key players, leaving the squad with an 0-10-1 regular season record. All the games were close in scoring but the Bulldogs just kept coming up short.

The girls received the #15 seed and with it, they were hoping to catch some teams off-guard.

The girls got their first win of the season in their first section game against neighboring Big Lake. The Hornets entered postseason as the #2 seed had already beat Becker twice this year. This time, however, the Bulldogs came out on top with an impressive 3-0 win. This was also Coach Ben Strom’s first win as head coach, taking over for long-time Head Coach Arnold Changamire heading into 2020.

With the win over Big Lake, the Becker girls were off to the section quarterfinals to battle the #7-seeded Heritage Christian Academy team. Despite the cold and windy day, Becker came out on top with a surprising, 4-1 win. This was a huge accomplishment as no other Becker soccer team in school history of the program had won two section games.

After knocking off the #2 and #7-seeds, the girls headed for #3-seed Orono in the section semi finals.

The team had an amazing send off. Dozens of people came out to show support for the girls. The football team lined the sidewalk and parents, friends and family members held signs and cheered from the road as they left the school.

Unfortunately, Becker lost the match on a cold and snowy, hard-fought game by a score of 4-1. Orono went on to win the section final game over Watertown, 2-0.

Becker ended up 2-1 in the 2020 post season which was a great way to end the season for seniors and coach Strom.

“I couldn’t be happier with our captains this year,” said Coach Strom.  “They were the best leaders we could have hoped for regardless of result all throughout the year!”

The Bulldogs had a solid starting line up with junior center-back Sarena St. Denis and her outside defenders Adeline Kent and Elle Schendzielos. Their skills made it extremely hard for anyone to get a shot off on sophomore Goalie Elizabeth Mackedanz.  Mackedanz stepped up to play after junior goalie Amanda Miner was injured in a car accident.  Mackedanz, who had never played goalie before, was quite impressive with saving 48 shots and letting in just eight goals in four games. Miner finished her season with 88 saves and 24 goals against.

Gamble and Suchy combined for 11 goals and six assists this year. Their speed upfront and their foot skills made them hard to defend.

Seniors Peterson, Madsen and Izzy Carlson controlled the middle of the field with a combined two goals and 11 assists on the season. They were the play makers. Together, they were hands down the best center midfielders in the conference.

Starting outside midfielder juniors Riley Norberg and Kennedy Rusin rotated with sophomores Ava Ewald and Hailey Szabla to complete the midfield, combining for six goals and three assists. The girls did a great job getting the ball up the field to the forwards and getting back to help the defenders.

Coach Strom filled the roster with underclassman to watch and learn from the seniors making next year a little easier transition. Mackenzie Janisch, Meagan Haessly and Alayna Moeller were a great addition to the team. The girls are also looking forward to Rachel Fuller being back after missing the entire year due to injury.

“I am so proud of the whole team and their fight and determination all year long,” said Strom.

Career varsity stats for the seniors: Suchy 22 goals and 11 assists; Gamble 16 goals and six assists (as well as hundreds of saves as a starting goalie for two years).

Two of the senior girls are continuing their soccer careers in college. Peterson is committed to play Division II soccer at Northern State University in South Dakota and Suchy committed to play at Gustavus Adolphus in St. Peter.

Next year, the Bulldogs will be led by the 2021 captains of Sarena St. Denis, Riley Norberg, Kennedy Rusin and Adeline Kent.

The team is waiting to hear if the end of season award banquet will be allowed. All conference and team awards will be coming soon.

“A huge thank you to Lisa Peterson and Erika Rusin for planning everything and making everything else possible this year,” said Strom. “We truly could not have done any of this without the two of them.”