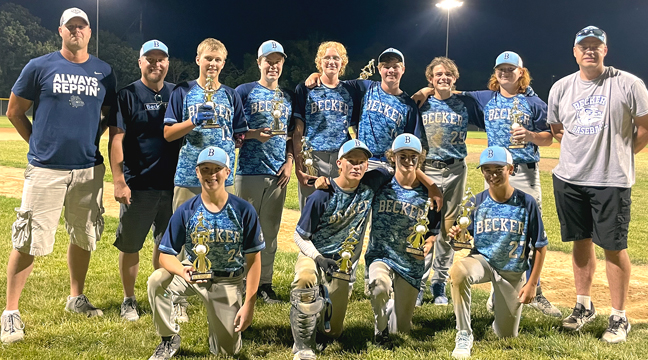 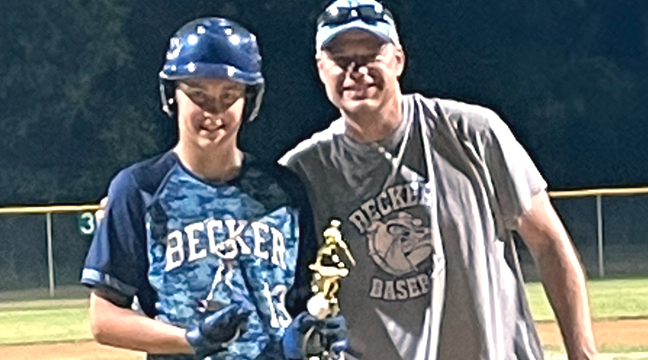 The Becker #1 team completed a wildly successful season last week in the 14U/15U age bracket of the Quad City League. Timely hitting, excellent defense and a stellar pitching staff helped the team to win the regular season championship with a perfect 12-0 record (plus two ties) before they advanced and captured the league playoff title last weekend.

The Quad City League is composed of teams from area cities, generally representing Becker, Big Lake, Clear Lake, Monticello, and St. Michael-Albertville.  This level of competition also marks the first time for the players competing at regulation distances for pitching (60’6”) and for bases (90’). The Becker Youth Baseball Association supported two teams at this age level this year - Becker #1 and Becker #2.

According to Head Coach Dave Kreft, his team scored 188 runs on the season and allowed just 88, for a total run differential of 100 runs. This regular season success earned the team the #1 seed and a first round bye during the league playoffs, which were hosted by STMA.

Last Thursday, the Bulldogs opened the playoffs with a 11-1 victory over STMA Yellow, as Nathan Weiss and Thatcher Jurek combined for the victory on the mound.

This propelled Becker into the semifinals on Saturday evening with a match up against SMTA Blue.  Weiss again started on the mound and threw the complete game, allowing just two hits and striking out 10. Kreft called the game his team’s “most complete game of the year,” as they won 11-1 via the ten-run rule in five innings.

Weiss, Saul Kreft, and Thatcher Jurek all had two hits in the game, with Austin Koester reaching base all three times with a towering triple, a walk, and a HBP.

The Bulldogs were not finished with STMA Blue, however, as the Knights advanced through the loser’s bracket to come back and face Becker on Sunday.

“We fell behind 9-0, but kept battling and scrapping but the rally was not enough,” Kreft said. The Bulldogs suffered their first, and only, loss of the season by a final tally of 12-7 in seven innings.

Because both teams now had one loss in the tournament, the result was a true championship game between the familiar opponents.

The championship game would see long innings by both teams with abundant scoring opportunities.

“We got off to an early start with five runs in the first inning and would plate multiple runs each inning,” Kreft said.

Becker also took advantage of 13 walks courtesy of STMA pitching, while Weiss and Jurek (who had a double and a triple) collected multiple hits.

The Bulldogs outlasted STMA for the championship in a time-limit shortened game by the score of 16-11. Seeing time on the mound in the championship games were Trenton Paulson. Thatcher Jurek, Evan Hubbard, and Saul Kreft.

“Besides the victories, Becker’s success was measured by continuous improvement throughout the season,” Kreft said.

“This title marked back-to-back Quad City Championships for Koester, Saul Kreft, and Weiss,” Kreft said. “Nathan Weiss was named the tournament MVP for Becker by earning two victories on the mound in eight innings pitched, with three hits allowed, and 15 strikeouts.   He also smashed five hits in nine at bats, while scoring seven runs and notching four walks at the plate.”