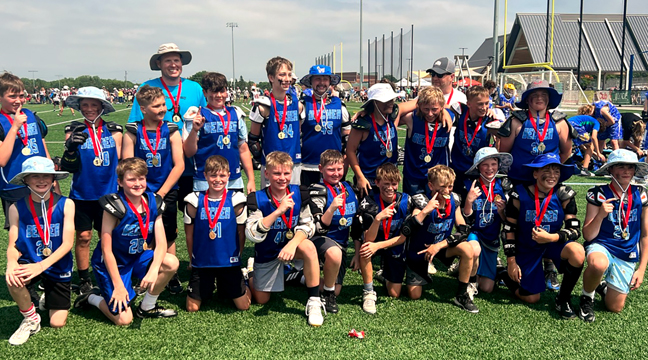 THE BECKER 12 AND UNDER LACROSSE TEAM went 5-0 in the state tournamnet. (Submitted photo.)

After difficult season, Becker 12U lacrosse has great showing at state

(Editor’s Note: The following article was submitted by the Becker 12U lacrosse team.)

Becker 12u lacrosse had a trying season this year. The kids were stretched thin as they had other commitments and vacations during the regular season games. Their season record prior to state was six wins seven losses and one tie.

The teamlost a few close games, but later had a great showing during state. The majority of the team members were able to attend and move the ball, play some great defense and of course score lots of goals. The team’s goalie only allowed seven goals in five games, which was an awesome accomplishment as it is always difficult to find someone to play goalie. The team was undefeated in the 12u boys bracket with a record of 5-0, scoring 41 goals and giving up just seven.

The championship game was very exciting. The team was tied up with two minutes left and scored a goal to pull ahead and held off the attackers for the win.