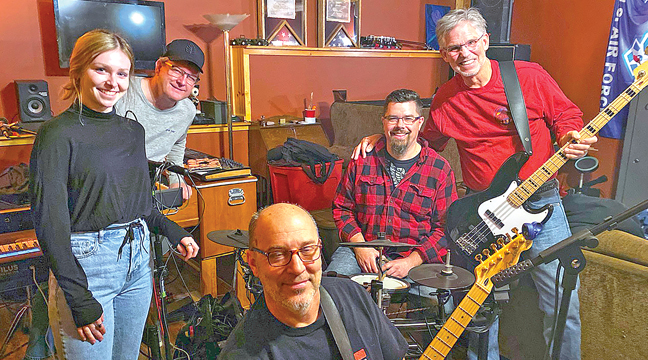 HUMBOLDT STATION is a band made up of (left to right): Emily Wallen, Todd Wick, Jon Peterson, Joe Boelke and Mike Wallen and they play 80’s, 90’s pop and rock as well as a little bit of country. They will debut their talents at Big Lake’s Music in the Park on Aug. 4. (Submitted Photo).

Former Big Lake Mayor Mike Wallen has traded in his gavel for a bass guitar and has formed a local band called Humboldt Station.

Big Lake was originally called Humboldt when it was formed until 1867. Due to the rich amount of ice Big Lake provided, it needed to be transported quickly, enabling Big Lake to be suitable for a railway station which was built in 1871.

“We wanted to pay tribute to the area and the name just sounded perfect for our new band,” said Wallen.

The “we” he is talking about is the rest of the band that includes: Todd Wick on keyboards, Jon Peterson on guitar, Joe Boelke on drums and Emily Wallen on lead vocals. Emily is Mike and Shelly Wallen’s daughter and she also performs on the keyboard on certain songs they play.

Their debut performance will be Aug. 4 at the Big Lake Music in the Park event.

They’ll have 25 or so songs to play in the 90-minute segment. They’ve been practicing in Wick’s basement in Big Lake on Tuesday nights to get ready for their kickoff concert in a couple weeks.

“Corrie Scott (Big Lake’s Recreation and Communication Coordinator) reached out to me a while back and asked how the band was forming,” said Mike. “I said, ‘I think we’re ready’, so she booked us!”

Despite the Music in the Park gig being their first, full-fledged exposure in front of a crowd, they will have an opportunity the week before to have a “full dress rehearsal” in St. Michael to prep for the gig.

Wick and Peterson have played together in bands while Boelke, Mike  and Emily are pretty green to the music scene despite being involved in worship and praise bands in the past.

The band hopes to have a website and Facebook presence soon. They encourage all to come out to their concert and show them support Aug. 4.