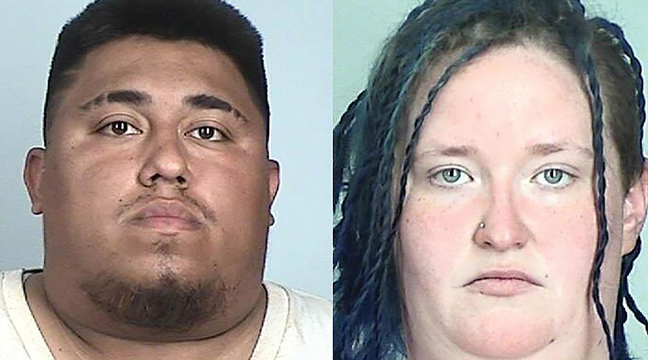 RICARDO JUAREGUI (left) of Osseo and Jessica Geraghty (right) of Elk River were arrested last month and charged with first degree possession of a controlled substance. (Photos from jail bookings).

Arrests lead to seizure of 10-lbs. of meth

(Editor’s Note: The following article was submitted to the Patriot by the Sherburne County Sheriff’s Dept.)

Elk River police and Sherburne County’s Drug Task Force coordinated an investigation last month that resulted in two arrests and removing 10 pounds of meth from the street, according to Sheriff Joel Brott.

Investigators in late June learned that a significant amount of meth had been mailed to an Elk River residence and that a woman had taken possession of the package. Investigators conducted surveillance and witnessed two men pull into the parking lot of the woman’s residence. One of those men went into the residence and was seen leaving with the package.

A traffic stop ensued during which 10 pounds of meth was recovered.

Charged with first-degree possession of a controlled substance are Jessica M. Geraghty, 28, of Elk River and Ricardo Juaregui, 24, of Osseo.

Both made their initial court appearances on the charges Tuesday in Sherburne County District Court.