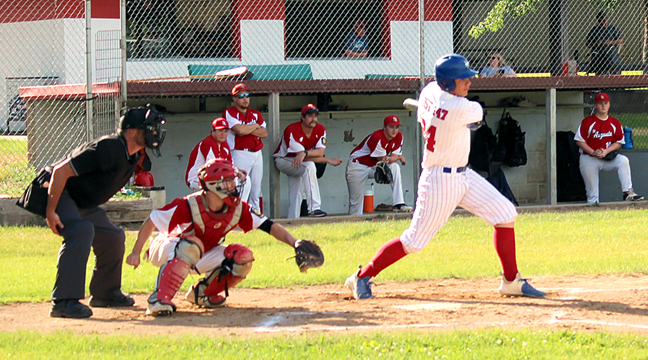 Kaden Haselius had a double and triple in Big Lake’s 13-2 win over St. Augusta Tuesday. He homered against Princeton last week. (Photo by Ken Francis.)

The Big Lake American Legion baseball team exploded for 10 runs in the second inning in a 13-2 rout of St. Augusta Tuesday.

It was the team’s second win of the season.

Big Lake went down in order in the first inning, but things were a lot different in the second. Fielding problems by St. Augusta were a big part of the scoring. Jaxyn Tschritter reached on a third strike passed ball to start the inning. He moved to second on another passed ball. After Isaiah Terlinden doubled, Blayne Varner walked to load the bases. Jeffrey Wanhala singled in one run. Isaiah Prom reached on a fielder’s choice to drive in a run. Travis Anderson reached on an infield error, scoring another run. Reid Josewski reached on a misplayed outfield fly ball. Conner Stukenholtz singled in a run. He scored on a triple by Kaden Haselius. Tschritter reached on a dropped throw to first, scoring Haselius, and Terlinden reached on a dropped outfield fly. Both runner scored on an error.

St. Augusta avoided the shutout with two runs in the bottom of the fifth on a walk, a double and an error. But the game ended with the third out by the 10-run rule.

Terlinden started on the mound and got the win. He allowed two hits and a walk while striking out three.

Wanhala pitched a scoreless inning before Josewski finished the game, allowing one earned run on two hits and two walks.

Haselius led the offensive attack with a double, triple and two RBIs. Wanhala had two hits and two runs batted in.

In the first game, Big Lake had a lead midway through the game, but fielding miscues led to some unearned runs for Princeton late in the game in an 11-6 loss.

Big Lake got on the board in the second when Stukenholtz hit a one-out double and scored on a single by Jonah Blackman.

Princeton took a 2-1 lead in the home second on a double, walk, fielder’s choice and a single.

Big Lake evened the score in the third on a solo home run by Haselius.

Princeton went ahead again in the home third with an unearned run on two errors, a stolen base and a single.

Big Lake tied the score in the fourth when Terlinden singled, advanced on a wild pitch and scored on a single by Blackman.

They went ahead, 4-3 in the fifth. Collin Skaug and Carson Gellerman were hit by pitches to start the inning. Cooper Cusick’s two-out single drove in Skaug for the lead.

But things came apart in the home fifth when Princeton scored four runs on triple, double, single, a stolen base and an error.

Leading 7-4, Princeton got four more in the sixth on two walks, a hit batter, two stolen bases, a single and two errors.

That was all they needed. Big Lake came back with two in the seventh when Gellerman was hit by a pitch, Josewski reached on an error and Tschritter doubled them home to end the scoring.

Skaug started on the mound and took the loss. He allowed six runs (five earned) on nine hits and a walk in 4.1 innings. He struck out five.

Cusick allowed five runs (two earned) on one hit and two walks in 1.1 innings.  Nehemiah Ruoso came in to get the final out in the sixth.

Princeton jumped out on top in the first inning on a two-run homer off Big Lake starter Haselius en route to a 10-5 win.

Big Lake came right back in the home first with three runs. Gellerman and Tschritter were hit by pitches. Cusick singled. Varner followed with an RBI single and two more runs scored on an overthrow for a 3-2 lead.

But the lead was short-lived. Princeton batted around in the second, scoring five runs on four walks, two stolen bases, a wild pitch and four hits. They added a run in the third on a two-base error and two groundouts.

Big Lake got a run back in the third when Tschritter singled, moved to third on a single by Terlinden and scored on a grounder by Josewski.

Princeton got a run in the fourth on a walk, stolen base and two singles.

Big Lake got its final run in the fifth. Tschritter was hit by a pitch, went to second on a hit by Cusick, went to third on a hit by Terlinden and scored on a groundout by Jeffrey Wanhala.

Haselius started on the mound and took the loss. He allowed five runs on four hits and two walks in 1.1 innings.