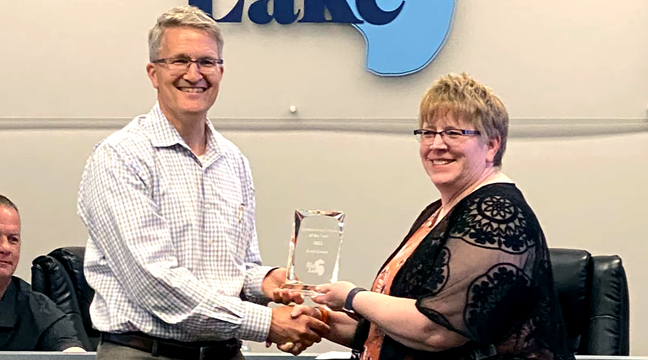 CITIZEN OF THE YEAR. Mayor Paul Knier presented Ketti Green with the 2022 Outstanding Citizen of the Year Award for her many years of volunteerism in the city. (Submitted photo.)

During last Tuesday’s Big Lake City Council meeting, the council discussed the police chief search, named Ketti Green as the Outstanding Citizen of the Year, and heard from the Spud Fest committee about this weekend’s events.

Last week, a special council meeting was held to narrow down the number of candidates for the police chief position. Due to data protection laws, all the candidates were referred to by number and not name.

Before the meeting, each council member cast his or her votes for top favorite candidates. At the beginning of the meeting, Mayor Paul Knier suggested that the candidates be narrowed down to the four with the most votes.

Council members Ken Halvorson and Kim Noding disagreed, as they felt the fifth person on the list was also worthy of consideration, and therefore they wanted to interview all five of the top candidates. However, the other council members thought that they should go with only the top four candidates so as to minimize the fees paid for background checks for those being interviewed. In the end, Noding and Halverson were outvoted and only the top four candidates are now being considered for the position. The council members went on to discuss who should be on the interview panels, as they wished to garner the opinions of first responders and community members in addition to those of the council.

At Tuesday’s regular city council meeting, Halverson spoke right before the end of the meeting in response to discussions online about the police chief search. There were some in the community who were upset that Acting Chief Sam Olson was not being considered for the permanent chief position.

“I personally am kind of disappointed that Chief Olson didn’t move forward in the process. But I hope everybody in our community realizes the job he’s done,” Halverson said. “I think he’s done a fabulous job of keeping our department together.”

He went on to express how he hoped Olson would stick with the department, as he was vital to its success moving forward.

Outstanding Citizen of the Year

Ketti Green was elected this year’s Outstanding Citizen of the Year. The award is given to residents of the Big Lake community who put in many hours volunteering for local organizations and generally helping to make the city a better place. Green has put in many years with various city organizations, including Beyond the Yellow Ribbon, Community Education, Minnesota Jaycees, Big Lake Spud Fest, Girl Scouts, Big Lake Planning Commission, and the Big Lake Parks Advisory Committee. She has also served as an election judge.

“I love volunteering,” Green stated in her acceptance speech. “I love making Big Lake a better place to live, to work, and play.”

Spud Fest returned for its 50th Anniversary this weekend, and in honor of this, Raeanne Danielowski, county commissioner and member of the Spud Fest board, gave a brief history of the celebration for the benefit of the council and the attendees. In 1972,  group of community business owners decided to put together an event with a goal of raising funds for youth activities. The name “Spud Fest” came from the abundance of potato farmers in the area. Sacks of potatoes were given away as prizes at the first Spud Fest events.

Danielowski proceeded to go over the schedule of events for the weekend.

Danielowski also noted that this year’s fireworks show will be the most spectacular ever. An anonymous donor gave money to make sure the show is amazing this year, and it’s likely the Spud Fest organization will not be able to put on as big of a show again.