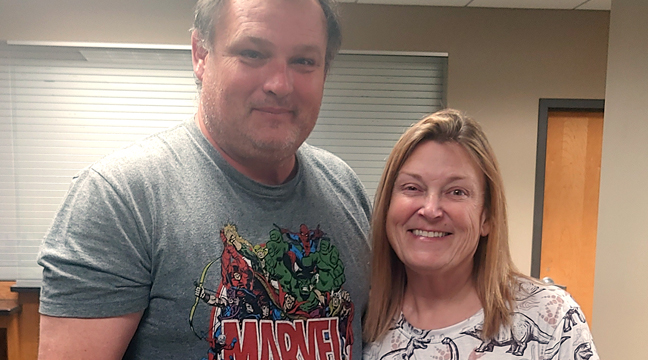 PAUL AND LOLLY, owners of the Third Rail Bar, were pleased that they would be able to move forward in creating a mural depicting Big Lake’s history on the side of their building. (Photo by Katherine Cantin.)

Last week, before the regular meeting, the Big Lake City Council held a workshop, during which they discussed election integrity.

During their workshop, council determined that the city would implement the “spot check” idea proposed by concerned citizens worried about voting integrity. At the county level, pre-specified races will be hand-counted to double check the count. The precinct used will be random. This is done for a few random precincts around the county every election cycle, and the city has a chance of being drawn at random for this double-check. If the city is not randomly selected, the city will pay to have the “spot-check” performed at the county level. Council did not know whether they would do so again in the future.

Timothy Myers spoke during the open forum portion of the regular meeting following the workshop. He said that he lived in Keller Lake Commons, which is a senior community. Recently, the apartment building at 655 Norwood Ln. has been transitioning into an assisted living home. Myers said he was shocked that the owners of the building were allowed to do that without any sort of notice being sent to the nearby homeowners. When talking to the city planner, he learned that the city allegedly did not know about the transition. He was also curious as to how the transition could occur without any public hearings or input at the city level. He asked that city staff be directed to investigate the matter.

For two years, Big Lake High School Student Ella Dotzler has served as the student liaison to the city council. Dotzler recently graduated, and will be attending Harvard in the fall. For her time serving as the student liaison, Mayor Paul Knier presented Dotzler with a certificate of recognition.

The council was planning to offer the police chief position to Capt. John Kaczmerek, but at the time of the meeting, the background check had not been fully completed, and so the item was tabled for the next regular meeting, which will take place August 10 at 6 p.m.

Capstone Homes is hoping to construct a neighborhood between Marketplace Dr. and 166th St. NW (near Cambo Flare.)

They asked that the council be lenient on some of the city ordinances, such as the rule of not having any trees in the right of way, and some other items. All of the proposed changes were supported by the planning commission.

The biggest issue with the application is the park land dedication. The land that the developer hopes to dedicate as park land was used as a landfill, and the environmental survey noted that the soil was contaminated. Staff advised that the city not accept these lands for city park land, as it may become a liability for the city. Rather, the city staff and the city attorney recommended that the city allow park dedication for a private park which would be maintained by the developer/HOA. Council Member Ken Halverson expressed concerns that the private park would become tax forfeit in the future if the HOA decided the possibly contaminated park was not worth the money. A lengthy discussion ensued.

Staff will continue to work with the developer on the issues raised by the council.

In Other Business,the Council:

• Sold a parcel that was owned jointly by the city and the township;

• Directed staff to work with Lolly and Paul, the owners of Third Rail, to make their idea for a mural a reality.